This article is using {{Card template}}.
See Help:Style guide/Card for how to edit this kind of article.
Edit this article
Prince Taldaram
45341 • ICC_852
Regular 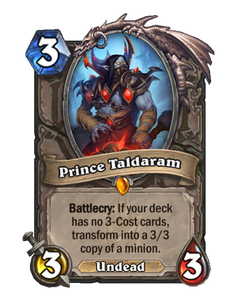 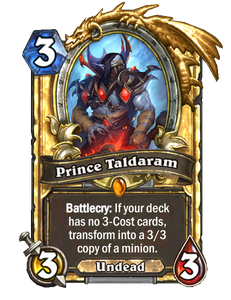 Three Princes stand before you. This one wants to copy others. 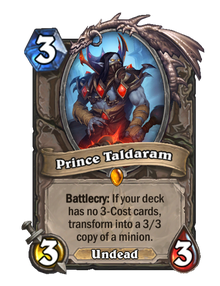 Prince Taldaram is a legendary neutral minion card, from the Knights of the Frozen Throne set.

Prince Taldaram is a card with a lot of potential power, but with a restriction that greatly inhibits deck building. Its ability to copy a minion is similar to Faceless Manipulator, but it does not copy the minion's stats in the process. This makes the card more situational, as it cannot be used to copy high-health taunt minions or create offensive versions of cards like Humongous Razorleaf; however, its lower mana cost means that it can potentially be played alongside a minion with a strong effect to immediately copy it, such as Archmage Antonidas or Emperor Thaurissan in Wild. The card's restriction, however, causes the card to be difficult to fit into a lot of decks that would benefit from this effect and causes the card to only naturally fit in decks that run no staple 3-cost cards.

Prince Taldaram is primarily seen in Cubelock decks, which does not have any core 3-cost cards in the first place. Its ability is used to its fullest with Carnivorous Cube and Bloodreaver Gul'dan. It can copy a Cube as well as whatever minion it consumed to create two additional copies of it, or it can copy another demon like Doomguard, which gets added to the list of demons that get ressurected by Bloodreaver Gul'dan's Battlecry with full stats.

Prince Taldaram is a member of the San'layn and the second boss of Ahn'kahet: The Old Kingdom.

From the World of Warcraft Adventure Guide
After Kael'thas's failed assault against The Lich King, some of his greatest blood elf followers were slaughtered and raised into undeath as darkfallen. Prince Taldaram is one of these cunning and bloodthirsty vampiric beings. Always seeking to please the Lich King, he has entered the war-torn depths of Ahn'kahet in search of lost nerubian relics that can empower the Scourge's murderous ranks.

After being defeated by adventurers, Taldaram was later raised into undeath yet again to serve on the Blood Prince Council in Icecrown Citadel alongside his fellow darkfallen Prince Keleseth and Prince Valanar.