This article is using {{Card template}}.
See Help:Style guide/Card for how to edit this kind of article.
Edit this article
Prince Malchezaar
39840 • KAR_096
Regular 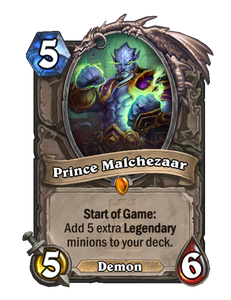 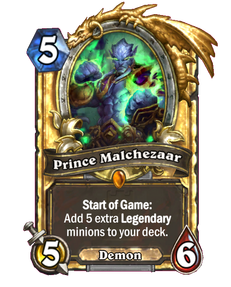 He was super excited to acquire Gorehowl at a garage sale!  Then super disappointed to find out it was a foam reproduction. 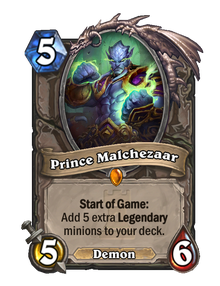 Prince Malchezaar is a legendary neutral minion card, from the One Night in Karazhan set.

Prince Malchezaar is a corrupted eredar and prince of the Burning Legion. He is encountered by Medivh during the adventure's first wing, The Prologue.

Following Malchezaar's defeat, his imp appears to be on the look-out for a new master.

"You face not Malchezaar alone, but the legions I command!"

Prince Malchezaar is a raid boss located at the very top of Karazhan. He can be encountered after the Chess event and controls all of the trash between the Game Room and Netherspace.

Little is known about Malchezaar, except that he is a man'ari eredar, he claims to be a prince, and he is a member of the Burning Legion. It is unknown how or when he arrived at Karazhan or what his purpose there is. He apparently arrived while some agents of the Violet Eye were still alive inside Karazhan, notably Keanna. It was likely shortly before Karazhan was sealed, as the Violet Eye were aware of Keanna's death.