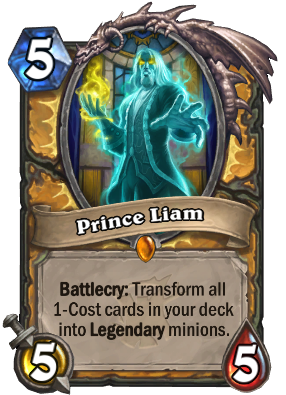 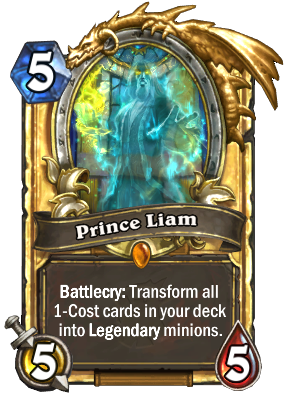 Battlecry: Transform all your 1-Cost cards in your deck into Legendary minions.
Flavor text

"I have a very particular set of skills. Skills that make me a nightmare for witches like you."

Prince Liam is an legendary paladin minion card, from the The Witchwood set.

Prince Liam can be obtained through The Witchwood card packs, or through crafting.

Prince Liam can be used as a "Plan B" for later stages of the game where your 1-cost cards have minimum impact on the game. If you are not relying on drawing a particular card from your deck and are aiming to outvalue your opponent with big minions, then this card helps in these situations. Having card draw like Divine Favor prepared before playing Prince Liam helps maximize his impact.

Liam also completely counters the Corrupted Blood from Hakkar, the Soulflayer, turning it into Legendaries while the opponent still has to deal with it.

Prince Liam Greymane was a member of the royal family of Gilneas, and the son and heir of King Genn Greymane. He was killed by Sylvanas Windrunner during the battle for Gilneas City.

Prince Liam’s devotion to his father and people was unceasing before he fell in defense of Gilneas. That was long ago—long before the curse. Recently, sightings of the Prince’s ghost have been reported. Rumors among the peasantry seem to imply that Liam’s spirit appears to people who are in great danger, and helps them do extraordinary, unbelievable things.

Perhaps the Prince feels that he failed his people once, and a desire to do better keeps him fettered to this mortal plane. Perhaps the curse denies him his eternal rest. Whatever the case, Prince Liam is not done serving Gilneas.[1]

Liam returning after death as a ghost is something that never occurred in World of Warcraft. As such, this ghostly version of Prince Liam is unique to Hearthstone.