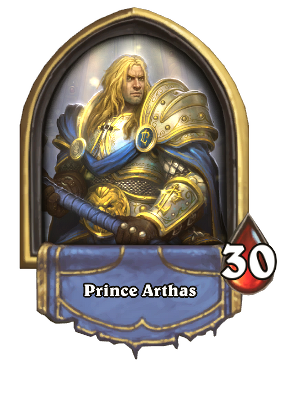 "Nothing shall prevent me from having my revenge, old friend. Not even you. Now, I call out to the spirits of this place. I will give anything, or pay any price, if only you will help me save my people."

Prince Arthas Menethil is an alternate hero for the

Arthas Menethil, Crown Prince of Lordaeron and Knight of the Silver Hand, was the son of King Terenas Menethil II and Lianne Menethil and heir to the throne. He was trained as a paladin by Uther the Lightbringer and was inducted into the Order of the Silver Hand. Arthas also had a romantic relationship with the kind sorceress Jaina Proudmoore. Committed to the protection of his people, Arthas was determined to stop the plague spreading throughout Lordaeron.

Despite his promising beginnings, Arthas became one of the most powerful and evil beings Azeroth would ever know. Although he killed the necromancer Kel'Thuzad, Arthas was unable to stop the spread of the plague and resorted to increasingly desperate methods, such as purging the city of Stratholme. Taking up the cursed runeblade Frostmourne, Arthas was able to defeat the demon Mal'Ganis, but he lost his soul in the process. Becoming a death knight of the Scourge, he led the undead in destroying Lordaeron, Quel'Thalas, and Dalaran. Arthas later made his way to the Frozen Throne of Icecrown and merged with the Lich King.

Ruling as the Lich King for years afterward, Arthas had the last remnants of his humanity destroyed and was ultimately defeated in combat by Highlord Tirion Fordring and his champions of the Light. Cradled by the spirit of his father, Arthas Menethil died, leaving the mantle of the Lich King to be taken by a noble soul who would contain the power of the Scourge.

Arthas is rewarded after a player defeats the Lich King in the final Knights of the Frozen Throne single-player Mission with all nine classes.[1]

Once unlocked and selected for use, Prince Arthas replaces Uther Lightbringer whenever the player uses a Paladin deck, as well as:

When viewed in the Collection, Arthas has the following flavor text:

The boy who would be King... LICH King.
Obtained by defeating the Lich King with every class.