This article is using {{Card template}}.
See Help:Style guide/Card for how to edit this kind of article.
Edit this article
Primordial Drake
41929 • UNG_848
Regular 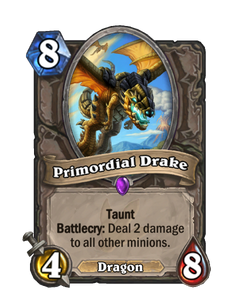 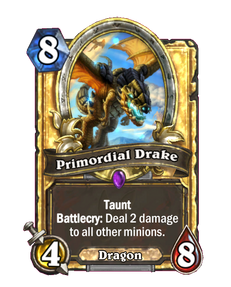 Before he became a rap artist. 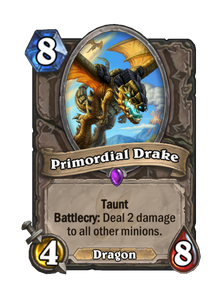 Primordial Drake is an epic neutral minion card, from the Journey to Un'Goro set.

A strong but expensive play, combining a decent Taunt minion with a board-clear Battlecry. The Primordial Drake fits well into control-type and Dragon-themed decks, where damaging your own board will not matter as much.

The Primordial Drake is a perfect late-game minion for the Warrior Quest Fire Plume's Heart; as an added bonus, it can be pulled with The Curator. It also has excellent synergy with the spell Sleep with the Fishes, dealing 5 damage to all other minions.

Proto-dragons (also known as proto dragons, protodragons or proto-drakes) are the feral, long-forgotten forebears of the dragon species. The vrykul frequently use them as mounts.

The proto-dragons descend from elementals who avoided being imprisoned in the Elemental Plane and instead remained on Azeroth, where some of them gradually transformed into creatures of flesh and blood. More specifically, Brann Bronzebeard recently uncovered evidence, corroborated by reports from adventurers in Deepholm, that proto-dragons may have origins in elemental drakes such as stone and storm drakes. The inhabitants of Deepholm, the Skywall, the Firelands, and the Abyssal Maw are less than talkative on these matters, however, and most of them were not around when the elemental prisons were created.

The proto-dragons are thus early version of dragons before they evolved into the sapient, beautiful majestic creatures they are known as today.

Galakrond, a massive proto-dragon, is known as the "progenitor of dragonkind" and long ago resorted to cannibalism. This act of consuming other proto-dragons gave Galakrond unbelievable strength and increased his size, but horribly mutated his body as well. His breath reanimated the dead proto-dragons around him into a form of undeath. It is said that from Galakrond the titans created the Aspects, but this is a rumor the Aspects actively encouraged so as to keep the truth about Galakrond a secret from the dragonflights.

Proto-drakes are generally bestial and display none of the great intelligence and wisdom of true dragons, though those that would later become the Dragon Aspects proved otherwise when they fought alongside Tyr against Galakrond. Kalecgos noted in his visions of the past that this was extremely odd.

Proto-dragon whelps grow at an incredible rate and can devour nearly twice their weight in raw meat per day. Some proto-dragons have a wide array of strengths and abilities, with examples including incredible fortitude, massive size or the ability to unknowingly tap into latent elemental energies in order to breathe fire or frost at their enemies.

The vrykul frequently use proto-dragons as flying mounts in the Howling Fjord and other parts of Northrend, and could be seen doing so in their constant siege of Valgarde. Wild proto-drakes can be seen in areas such as Storm Peaks and Sholazar Basin. Bronze proto-drakes were used as mounts by the Argent Crusade in Icecrown after they were discovered in the Bronze Dragonshrine by the bronze dragonflight. The Time-Lost Proto Drake is famous for being extremely hard to catch.