This article is using {{Card template}}.
See Help:Style guide/Card for how to edit this kind of article.
Edit this article
Primalfin Champion
41866 • UNG_953
Regular 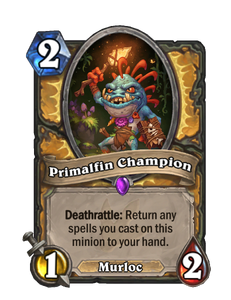 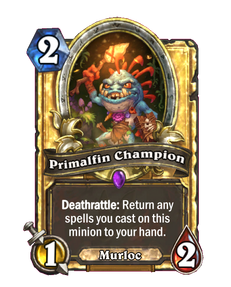 Dimensions: Full • 330 x 410px
Deathrattle: Return any spells you cast on this minion to your hand.
Flavor text

Sure, he'll return your stuff. OVER HIS DEAD BODY! 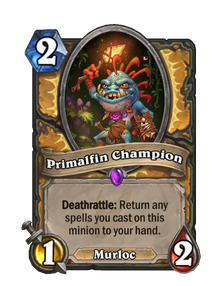 Primalfin Champion is an epic paladin minion card, from the Journey to Un'Goro set.

Example: Primalfin Champion will remember and return Blessing of Kings, Hammer of Wrath, and Holy Light if they were all played on it by its owner.

This minion stores any spells you cast on it, and returns them to your hand when it dies. This makes many spell enchantments placed on it less weak to removal effects. This minion is still extremely weak to transform, silence, and return to hand effects, however.

Once buffed, don't forget to take advantage of healing spells on Primalfin Champion, especially if they have auxilary effects, since those will be returned as well.

Primalfin Champion obviously has incredible synergy with The Last Kaleidosaur quest, as it can have multiple spells cast on it, then after it dies, those spells can be recast on other minions.