This article is using {{Card template}}.
See Help:Style guide/Card for how to edit this kind of article.
Edit this article
Priestess of Elune
424 • EX1_583
Regular 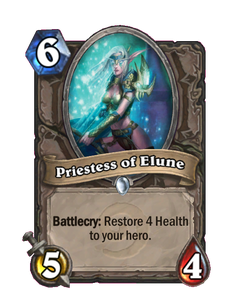 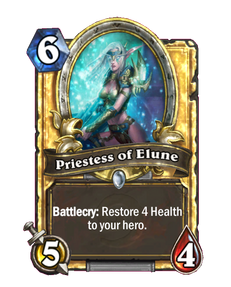 If she threatens to "moon" you, it's not what you think. 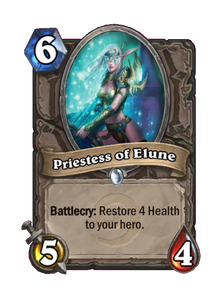 Priestess of Elune is a common neutral minion card, inducted into the Legacy set, formerly from the Classic set. 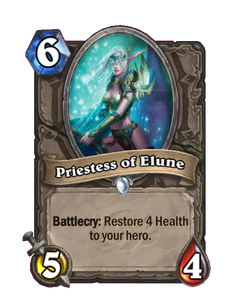 Priestess of Elune is too weak a minion for her cost. The healing Battlecry is insufficient to compensate for this, especially because it can't target damaged minions. The card is slightly less worse in weapon classes because it heals part of the damage inflicted when using a weapon to clear the board, or in Warlock decks where it compensates some of the self-inflicted damage of Life Tap. But even for those classes, that healing is not enough to compensate for the tempo loss of paying 6 mana to get a minion with stats comparable to most 4-mana minions. Compare this card with Shroom Brewer, which has 1 less Attack, but costs 2 less mana and has the versatility of being able to heal minions.

In Arena, this card can sometimes be chosen if none of the other options offered are very good. During the early and mid game this is still a weak card, but when an Arena match reaches the end game it often sees both players top-decking; at that stage healing your hero while dropping a 5-4 minion can swing the match in your favour.

Summon
I am the blade of the Goddess.

The Sisterhood of Elune (aka the Sisters of Elune or simply the Sisters) are the oldest night elf religious and magical order, predating the quel'dorei by some 2000 years. As the name implies, they are an order of priestesses dedicated to the worship of the moon goddess, Elune — priestesses of Elune. This ancient night elven order remains in existence to this day and, as their name implies, entrance to its upper echelons is available exclusively to women, on the belief that Elune's deepest mysteries can only be understood by a woman's heart. The war chants of the Sisters can call down the Night Warrior's wrath to smite their foes, and their prayers to the Mother Moon can nurture even the gravely wounded back to health

Elune (or Mu'sha, as called by the tauren) is the major deity worshipped by the night elves. She is associated with the larger of Azeroth's two moons, the White Lady, and is widely considered to be the mother of Cenarius, the forest lord and patron god of all druids. Elune is one of the few true deities of Azeroth. She nurtured and sheltered the earliest living beings of the world as they awaited the first dawn, giving them the chance to thrive and to grow into the present myriad of life, along with all the possibilities and promises that it entails. In tauren mythology, Elune is revered as the left eye of the Earthmother, though she is not worshipped as a sentient deity by the tauren.

Strongly associated with healing, tranquillity and harmony, the moon goddess Elune has been revered by the night elves and several other races since the earliest ages in Azeroth's history. However, the Mother Moon is not a goddess who advocates peace at all costs. Indeed, one of Elune's aspects is the Night Warrior, who is said to lift the souls of the valiant fallen from the battlefield and set them riding as newborn stars across the eternal nightsky.