Priest of the Feast

This article is using {{Card template}}.
See Help:Style guide/Card for how to edit this kind of article.
Edit this article
Priest of the Feast
39442 • KAR_035
Regular 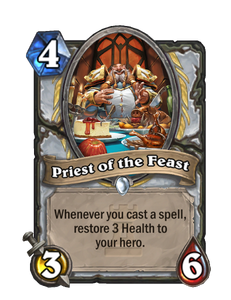 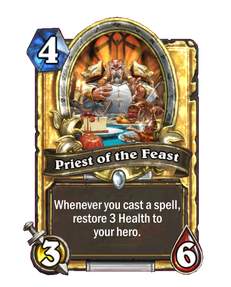 Dimensions: Full • 330 x 410px
Whenever you cast a spell, restore 3 Health to your hero.
Flavor text 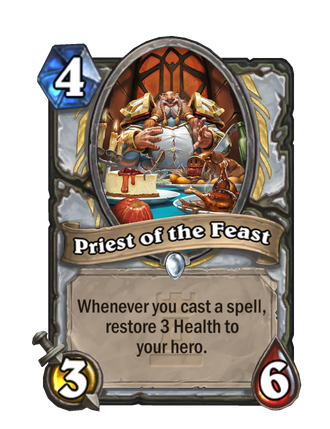 Priest of the Feast is a common priest minion card, from the One Night in Karazhan set.

This card is a strong addition in not just spell-heavy decks, but in almost any Priest deck overall. Its high amount of Health for its Mana cost makes it hard to remove by spells of comparative costs alone and lets it trade in favor against many 3-drops.

The triggered effect helps solve the Priest's issue of having limited opportunities to heal themselves early on. Coupled with hard removal or board clears or even a few cheap spells to heal or bulk up your minions, Priest of the Feast helps stabilize the Priest's health without sacrificing tempo. Use caution when also playing an

Priest of the Feast is a dwarven priest with a penchant for eating banquets, especially funnel cakes. The character canonically has a son, the Scholomance Academy student depicted in the artwork of