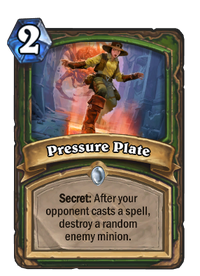 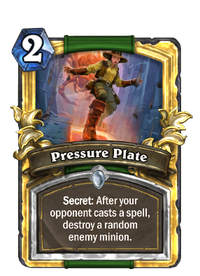 The appropriate dishware for stressful situations.

Pressure Plate is a common hunter spell card, from the Saviors of Uldum set.

Pressure Plate can be obtained through Saviors of Uldum card packs, or through crafting.

Effectively a Deadly Shot tied to a trigger, Pressure Plate can be a nasty surprise for opponents looking to buff a single minion. While less effective on wide boards, being able to de-value cards like Bloodlust and Savage Roar can also be a life-saver. Because this Secret triggers after the spell resolves, it can also counter spells that summon only one or two minions, like Unleash the Beast and Conjurer's Calling. A well-timed Pressure Plate can force the opponent to make sub-optimal plays to try and minimize the damage it deals, giving you an edge in tempo against midrange and control decks.

Pressure Plate can easily defuse most Mecha'thun combos, as such combos (aside from Mecha'thun Priest) often require playing two or more spells after Mecha'thun.