This article is using {{Card template}}.
See Help:Style guide/Card for how to edit this kind of article.
Edit this article
Preparation
1158 • EX1_145
Regular 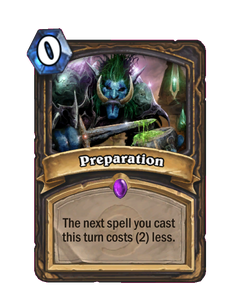 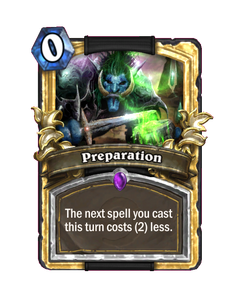 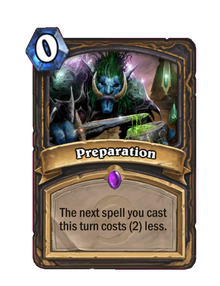 Preparation is an epic rogue spell card, inducted into the Legacy set, formerly from the Classic set. 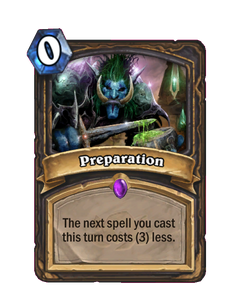 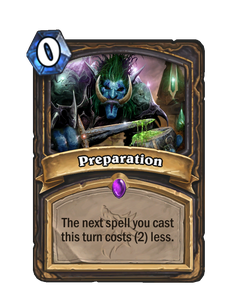 Two copies of regular Preparation are obtained for raising rogue to level 8.

Two copies of golden Preparation (Core) are obtained for winning 250 games as rogue.

Preparation (Core) is uncraftable and cannot be crafted or disenchanted.

Preparation is one of the best Combo activators for Rogues, disregarding the state of the board unlike Backstab or Shadowstep on top of providing a mana discount for chaining more Combo cards. As a free spell used in combination with other spells, it is excellent for use with cards such as Violet Teacher and Gadgetzan Auctioneer, and in such decks is best saved for when one of these minions is on the board.

Preparation is also useful for making expensive spells much more accessible. Cards like Sprint or Vanish can be used without consuming all of your mana.

Commentary:
All changes we make to the Basic and Classic sets are aimed at ensuring Hearthstone's long-term health. Preparation is currently seen as such a powerful card that it appears in nearly all Rogue deck archetypes. That said, the change we've landed on is a small one. While we do want the card’s power to decrease, we also think it's important for Preparation to remain a reasonable option, since it fits the Rogue class fantasy so well.
Preparation is regularly used to reduce the cost of cards like Sap or Eviscerate, and those interactions will remain unchanged. Reducing the cost of your next spell by 2 as opposed to 3 opens our design options up a little more to create higher cost Rogue spells without having to balance so closely around the assumption that they'll be cast alongside Preparation.