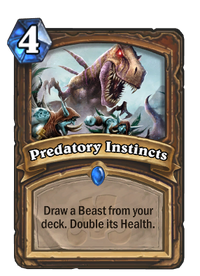 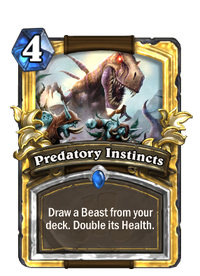 Draw a Beast from your deck and double its Health.
Flavor text

Somebody’s been eating their funnel cakes.

Predatory Instincts is a rare druid spell card, from the Rastakhan's Rumble set.

Predatory Instincts can be obtained through Rastakhan's Rumble card packs, or through crafting.

Predatory Instincts is a great way to guarantee a Beast draw. Drawing essential core Beasts in decks such as Hadronox in Taunt Druid early on can cease the possibility of Hadronox or other Beasts of being Milled, or any other types of deck destroying effects.

The addition of doubling the drawn Beast's health can be useful for cards such as Oondasta, Gonk, the Raptor, or any other high health Beasts. Witchwood Grizzly and Winged Guardian works particularly well with this card.

Predatory Instincts was a talent for Feral druids in World of Warcraft that increased damage dealt from melee critical strikes and reduced damage taken from enemy area of effect attacks while the druid player was in Cat Form. The talent was removed in Cataclysm.