This article is using {{Card template}}.
See Help:Style guide/Card for how to edit this kind of article.
Edit this article
Power Word: Tentacles
38426 • OG_094
Regular 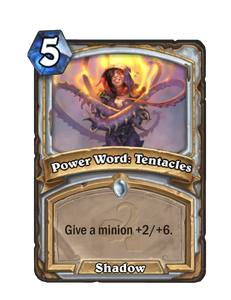 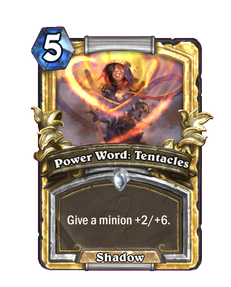 Because you're wrapped in a protective layer of… tentacles? 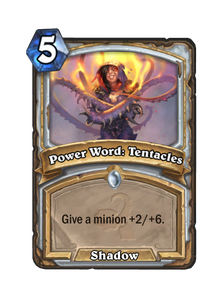 Power Word: Tentacles is a common priest spell card, from the Whispers of the Old Gods set.

In zoo or aggro priest decks this card can increase survivability of your low Health minion, like Acolyte of Pain, Northshire Cleric, etc. However, compared to Velen's Chosen, this card is fairly poor, trading +1 Spell Damage for 2 extra Health, at an extra cost of 2 mana. This card is also strictly worse than Power Infusion, which has the same effect at one mana cheaper.

The sizable buff granted by this card can be useful for creating advantageous trades, for creating a good target for repeated healing using Lesser Heal, for keeping a key minion alive, or for getting some extra damage. Given the cost of the card and the size of the buff, it is often better played on a small or medium minion, turning it into a larger threat, than on an already large and powerful minion, making it harder for the opponent to remove all your threats on the next turn.

Power Word: Tentacle's high cost prevents it from being played the same turn as most bigger minions.

This card represents a very Old Gods-twist on the priest's powers; where Power Words normally grant holy, strengthening effects like Power Word: Shield and Power Word: Glory, this one causes the lucky recipient not only increased strength and resilience, but also a number of tentacles.