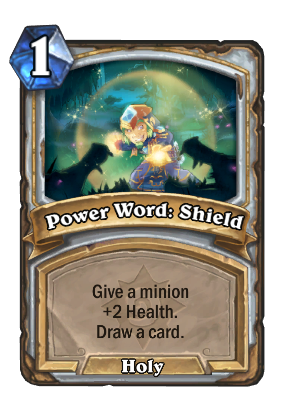 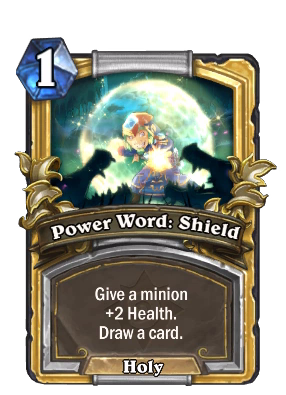 Give a minion +2 Health. Draw a card.
Flavor text

Sure the extra protection is nice, but the shield really reduces visibility.

Power Word: Shield is a priest spell card, inducted into the Legacy set, formerly from the Basic set. 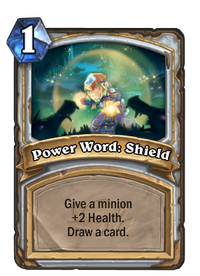 One of the Priest's many Health-boosting effects, Power Word: Shield is one of the earliest available Health-buffing cards that Priests have access to. While 2 extra Health may not be much, it can mean a difference between a living and dead minion in the early game and as a 0-cost card it can be played without sacrificing tempo. However, this card's low overall impact makes it difficult to include in a deck. On the other hand, combined with Gadgetzan Auctioneer it becomes an efficient way to draw cards from your deck, giving it utility in combo decks that need fast draw.

In World of Warcraft, Power Word: Shield (abbreviated PW:S) is a defensive Discipline Power Word available at level 5. It creates a protective shield around a friendly target which absorbs a set amount of damage. The spell additionally grants the Borrowed Time buff, increasing Haste gains from all sources for a few seconds. To prevent overuse, Power Word: Shield also gives the target the 15-second Weakened Soul debuff, which must elapse before another shield can be applied.