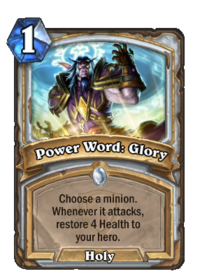 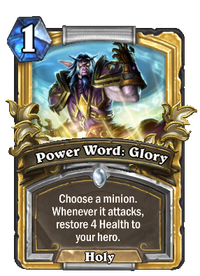 Choose a minion. Whenever it attacks, restore 4 Health to your hero.
Flavor text

Power Word: Glory can be obtained through The Grand Tournament card packs, or through crafting.

Similar to the paladin's Blessing of Wisdom, Power Word: Glory is a simple card with multiple uses. It can be used on survivable minions in the hopes of better longevity, on the few neutral minions with Windfury for multiple Health gain in one turn, or on enemy minions to force bad trades (as the opponent tries to get rid of it). Note that multiple copies of this effect can be applied to the same minion; if Power Word: Glory is played twice on a minion, attacking with that minion will heal you for 8 Health.

If you're going to cast it on one of your own minions, it's best to be able to attack with the minion that turn, so you are guaranteed at least 1 activation of the effect. If you cast it on a minion that's exhausted, you can bet your opponent will remove it if at all possible.

While more obviously used upon one of your own minions, this spell can also be used upon enemy minions to great effect. This can be used defensively to make an opponent think twice about attacking with a dangerous minion, or can force them to heal you in order to make use of their minion. This buff will make them more likely to sacrifice that minion in preference of another, but can also be removed with a Silence.

A quirk of this spell is that if your opponent uses a Faceless Manipulator to copy your minion with this buff, the copied minion's attacks will still heal your hero, and not your opponent. The target of healing is set at time of casting, and isn't simply the current owner of the minion. This is also important when considering taking control of a minion buffed with Power Word: Glory using a mind control effect such as Mind Control.

Like all the other healing effects, be aware that this buff is affected by Auchenai Soulpriest, potentially damaging the controller instead of healing them. This strongly discourages using the two in combination, although forcing an opponent with a Power Word: Glory minion to take control of your Soulpriest (such as through Sylvanas Windrunner's Deathrattle) can be an effective way of persuading them to dispose of the buffed minion.

Power Words (often abbreviated PW:...) are special Holy abilities used by Priests to protect and strenghten allies. There are two other types of Words: the Holy Word and the Shadow Word.

Power Word: Shield is another example of a Power Word. Power Word: Glory, however, is unique to Hearthstone.