This article is using {{Card template}}.
See Help:Style guide/Card for how to edit this kind of article.
Edit this article
Power Overwhelming
846 • EX1_316
Regular 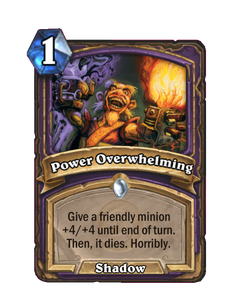 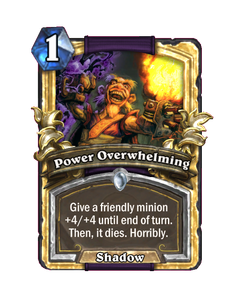 We cannot even describe how horrible the death is. It's CRAZY bad! Maybe worse than that. Just don't do it. 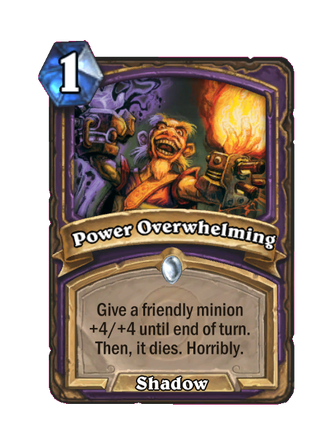 Power Overwhelming is a common warlock spell card, inducted into the Legacy set, formerly from the Classic and Hall of Fame sets. 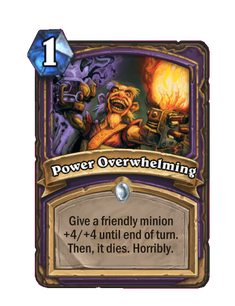 Wolfrider to do large amounts of damage in one turn. Another good combo is using this card on creatures with Windfury.

Power Overwhelming is also a noted combo with the card

Similarly, Power Overwhelming can be combined with

Shadowflame to clear the opponent's board while sacrificing only a small minion. As an example, a warlock player could cast Power Overwhelming on a

Possessed Villager, attack with it, and then cast Shadowflame on it to damage every enemy minion for the increased damage.

Power Overwhelming does not have any specific lore in the warcraft universe, although its character fits well with the warlock class. However, the name itself may well be a reference to Starcraft. In Starcraft, Protoss Archons says the phrase and it is also one of the game's cheatcodes, activating a godmode for the player's units, making them invulnerable to attack (but not kill instantly), which is ironic when considering Power Overwhelming kills the minion it is cast on.

Commentary: Power Overwhelming allows for extremely mana-efficient minion trades or high spikes of damage for only one mana. Keeping this card exclusive to Wild will prevent some crazy combinations and spike damage. Warlock decks also tend to use lots of Classic cards, so the decks changes less when new expansions release. This change will help increase the variety of cards in Warlock decks over time.