This article is using {{Card template}}.
See Help:Style guide/Card for how to edit this kind of article.
Edit this article
Potion of Illusion
59621 • SCH_352
Regular 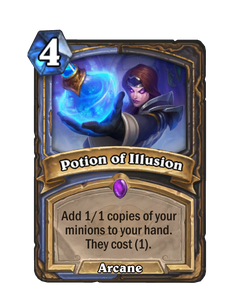 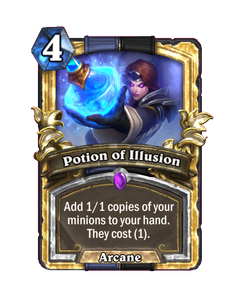 Unfortunately, there's no potion that can make you unsee all the faces in that bottle. 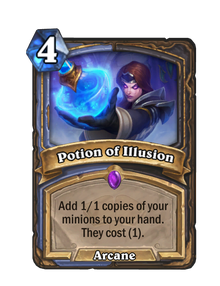 Potion of Illusion is an epic mage/rogue spell card, from the Scholomance Academy set.

Potion of Illusion is useful as a value generator for cards that do not rely on stats, such as Deathrattles, Battlecries and other miscellaneous effects. In Deathrattle decks, this card can be used to generate cheap copies of powerful death rattles which usually have a high mana cost, such as Plagued Protodrake, Sneed's Old Shredder or Scrapyard Colossus.

It can also be useful when you would like to have more than two -or one if legendary- copies of a given minion on your board, similarly to Barnes, Simulacrum, or Molten Reflection. Examples of interesting targets are Sorcerer's Apprentice, Malygos, Jandice Barov, Mozaki, Ras Frostwhisper, etc.

With two Sorcerer's Apprentices and two Potions of Illusion, it's even possible to set up for an infinite damage combo. Play the two Apprentices, then the Potion. Play the 1/1 copies then play the second Potion, getting four 1 mana Apprentices in hand. On the next turn, play Archmage Antonidas, The Coin (which can be generated by Licensed Adventurer and a cheap sidequest such as Elemental Allies or Learn Draconic), and the four Apprentices for unlimited 0-mana Fireballs.