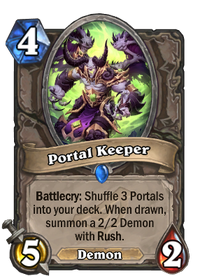 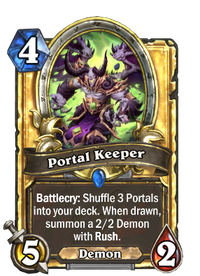 Battlecry: Shuffle 3 Portals into your deck. When drawn, summon a 2/2 Demon with Rush.
Flavor text

No longer allowed to be "it" when playing demon tag.

Portal Keeper is a rare neutral minion card, from the Rise of Shadows set.

Portal Keeper can be obtained through Rise of Shadows card packs, or through crafting. 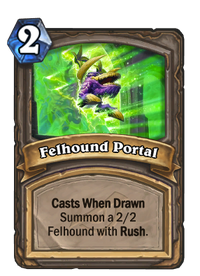 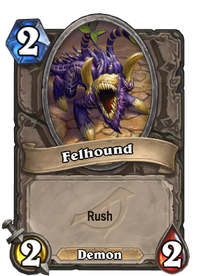 Holding an identical effect to Portal Overfiend, Portal Keeper gives you a below-average body in exchange for more favorable Trade options in the future. This can be used effectively in decks with powerful Card draw tools such as Miracle Rogue or a Plot Twist-themed Warlock to gain advantage of the opened portals. Alternatively, they can be transformed using Arch-Villain Rafaam or Golden Monkey into random Legendaries for extra value.

Spirit of the Frog has some utility with the Portals, since any 1-cost Spell will likely draw out your Portals immediately.

Portal Keeper is a nathrezim.

Nathrezim (called dread lords or dreadlords in the Common tongue) are intelligent and cunning demons who usually act as intelligence agents, interrogators and emissaries for the fiery lords of the Legion, notably Kil'jaeden, as well as tacticians and lieutenants upon the field of battle in time of war. While they are powerful foes on the battlefield, they prefer to turn nations against each other through manipulation and guile. The nathrezim are merciless villains who feed upon the energies of mortal creatures. They utilize terror and subterfuge - often turning brother against brother as whole worlds fall before their dark influence. They are known to be extremely manipulative and masters of trickery; they sometimes refer to themselves as thal'kituun in their language, meaning "the unseen guests".

During the Third War, some of them served as the Lich King's jailors, on the behest of Kil'jaeden, and commanded the Plague of Undeath and the Scourge that swept through Lordaeron.