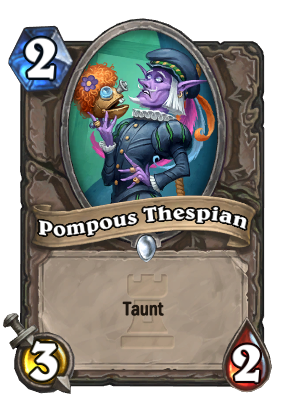 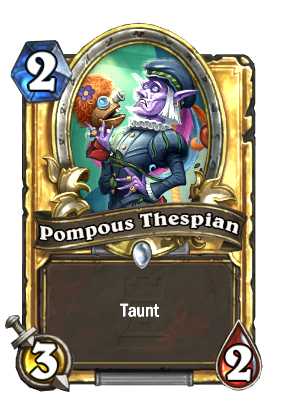 Alas poor Annoy-o-Tron! A fellow of infinite jest, of most excellent fancy!

Pompous Thespian is a common neutral minion card, from the One Night in Karazhan set.

Two copies of regular Pompous Thespian are obtained by defeating Julianne, the first boss in One Night in Karazhan's second wing, The Opera.

As a Wild-format card, both regular and golden versions of Pompous Thespian can also be crafted for the following amounts:

A direct upgrade from Frostwolf Grunt, costing the same but having +1 Attack. A basic early game Taunt option that can trade with most 2-drops.

This minion depicts one of the renowned thespians invited by Barnes to perform at Karazhan's opera house. This particular actor appears to have taken on the role of Hamlet (see Trivia).

Alas, poor Yorick! I knew him, Horatio; a fellow of infinite jest, of most excellent fancy; he hath borne me on his back a thousand times; and now, how abhorred in my imagination it is! My gorge rises at it. Here hung those lips that I have kissed I know not how oft. Where be your gibes now? Your gambols? Your songs? Your flashes of merriment, that were wont to set the table on a roar?

This is confirmed in the card's flavor text: "Alas poor Annoy-o-Tron! A fellow of infinite jest, of most excellent fancy!"