This article is using {{Card template}}.
See Help:Style guide/Card for how to edit this kind of article.
Edit this article
Polluted Hoarder
38961 • OG_323
Regular 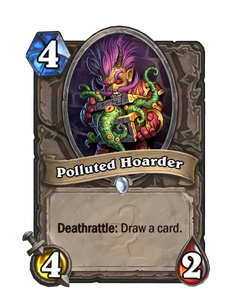 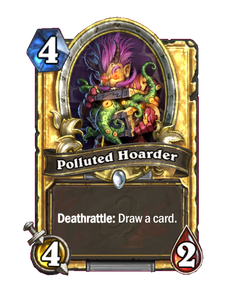 Roll ‘greed’ OR THIS COULD HAPPEN TO YOU. 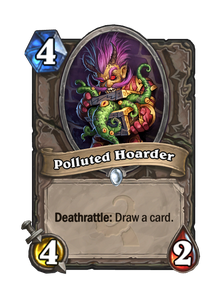 Polluted Hoarder is a common neutral minion card, from the Whispers of the Old Gods set.

This has the same stats as Cult Master, but is in comparison (almost) certain to draw a card. Cult Master is likely a better pick in a minion-heavy deck, or any situation where the player is ready to trade a minion, since the card will be drawn immediately; however, Polluted Hoarder is far superior on an empty board, making it essentially a safer but far less lucrative card draw option.

An average card in Arena, where card draw is important, and spells that deal 2 or more damage are more scarce than in other game modes.

Summon
Mine! All mine!
Attack
Gimme!