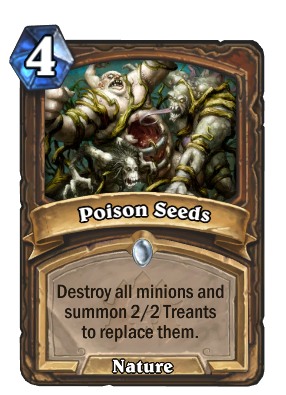 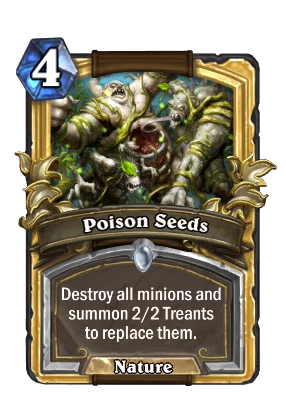 Destroy all minions and summon 2/2 Treants to replace them.
Flavor text

Poison Seeds is a common druid spell card, from the Naxxramas set. It summons Treants.

Two copies of regular Poison Seeds are obtained by completing the druid Class Challenge in Curse of Naxxramas.

As a Wild format card, both regular and golden versions of Poison Seeds can also be crafted for the following amounts: 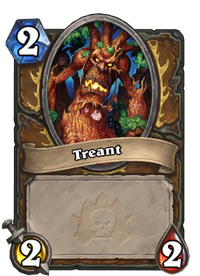 Clearly, this card is most useful when the opponent has substantially higher-quality minions: The 2/2 Treants summoned in their place are far from harmless, but possess no special abilities. This is especially true if the casting player has a greater number of low-quality minions, since not only will the powerful enemies be removed, but the player will be left with a numerical advantage on the now-equal minions. Poison Seeds also synergizes well with Deathrattles such as Mounted Raptor or Soul of the Forest, as the minions will be destroyed instead of transformed. Remember to take care as this applies to enemy Deathrattles as well.

Before casting Poison Seeds, players should look for any attacks that kill an opponent's minion without killing their own (or, more rarely, trading some of their own minions to clear a greater number of the opponent's), resulting in a net gain of Treants over the opponent. One-for-one trades may also be appropriate since the opponent's Treants will be able to act first, possibly allowing the opponent to buff them or deal an unacceptable amount of damage instead of trading. Any minions not used for trading should be used to attack the opponent before being sacrificed. For example:

This spell is often comboed with Starfall (using its area of effect damage Choose One option) for a 9 mana full board clear, or Spreading Plague to present an insurmountable wall of taunts, since Treants trade poorly with the Scarabs. This is effective even for removing multiple extremely high-Health targets or those protected by a Divine Shield or elusiveness. Due to the huge number of minions destroyed in that turn (each enemy minion provides 2 deaths: one from the Poison Seed, the other from the Starfall, for a potential 14 deaths), the player might be able to play one or two powerful Volcanic Lumberers to gain board control.