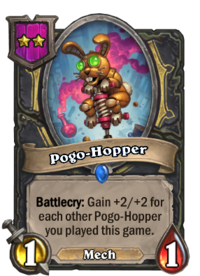 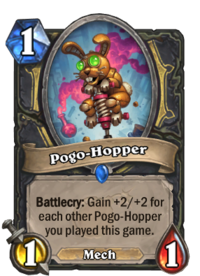 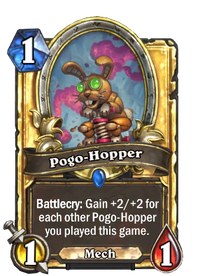 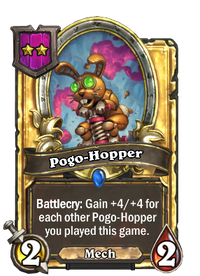 Battlecry: Gain +2/+2 for each other Pogo-Hopper you played this game.

Pogo-Hopper was a Tier 2 minion in the Battlegrounds game mode.

Pogo-Hopper was one of the hardest cards to play in the game because its buff was heavily dependent on rolling itself multiple times. Pogo-Hopper builds were very RNG-reliant, and other scaling minions like Wrath Weaver and Rabid Saurolisk are easier to buff. On top of this, you were need to stay in Tier 2 in order to maximize your chances of finding Pogo-Hoppers, which will lower the damage you dealt to heroes.

Once you had a well-scaled Pogo-Hopper, giving it Divine Shield with Selfless Hero or Annoy-o-Module made it effective in the late game.