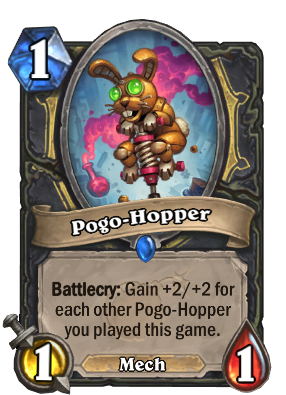 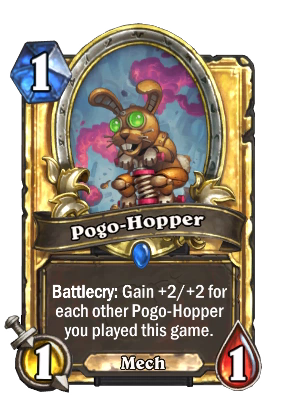 Uncollectible
Battlecry: Gain +2/+2 for each other Pogo-Hopper you played this game.
Flavor text

Once you hop, you just can't stop!

Pogo-Hopper is a rare rogue minion card, from The Boomsday Project set.

Pogo-Hopper can be obtained through The Boomsday Project card packs, or through crafting.

Pogo-Hopper is a card with a mechanic comparable to Jade Golems, as it gets drastically better over the course of the game. The second Pogo-Hopper played already becomes a 3/3 for 1 mana, which is far above average, and it can continue to scale up afterwards. Rogues have a wide arsenal of tools using duplicate and Return to hand mechanics to play more Pogo-Hoppers, such as Shadowstep, Togwaggle's Scheme and Lab Recruiter, generating massive threats for only 1 mana per minion.

Vanish has found new utility with this card, as it can be used to clear the board and return your Pogo-Hoppers to your hand while leaving you with enough mana to potentially play four more Pogo-Hoppers.

Applying Zilliax on a powered-up Pogo-Hopper can provide you with an immense amount of health gain, which can help stabilize your health against more aggressive enemies. Bronze Gatekeeper can also turn one of your Pogo-Hoppers into a large taunt wall, which will also help against aggressive opponents.

Pogo-Hopper has powerful synergy with Elven Minstrel, as it can draw these Pogo-Hoppers from your deck and also has a very powerful on-play effect, which is better with the same duplicate and return to hand mechanics. Valeera the Hollow and Sonya Shadowdancer are also good choices.