Difference between revisions of "Play mode" 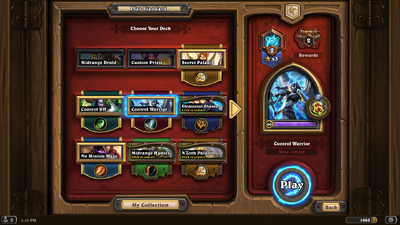 Preparing for battle in Ranked play mode, in Standard format

Play mode is a game mode that matches players against other human players of similar skill. Players can choose to play Casual 'friendly' games, or take part in Ranked play, earning special medals to reflect their skill and standing within the community. Play mode represents the standard mode of Hearthstone play, and can be accessed through the 'Play' button from the main menu screen.

Featuring human opponents who can offer a challenge above that of Practice mode, but lacking the high-stakes gambling elements of the Arena, Play mode is the standard mode of Hearthstone play. It offers more experience than Practice mode above level 10, and allows the completion of daily quests, as well rewarding players with 10 gold for every 3 victories, up to a maximum of 100 gold per day. Play mode is the main forum for play using constructed decks. Where Arena focuses upon shrewd selections of random cards, Play mode is where players can put the lovingly-crafted and painstakingly-collected cards from their own collection into action. 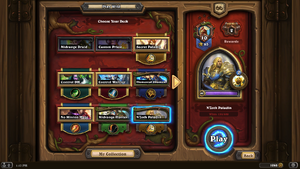 The play screen in Wild format

The Play screen allows players to select a custom or basic deck of their choice, before entering the Finding Opponent screen where a suitable opponent will be selected. To the top right of the screen players can select either Ranked or Casual play, determining the form of game played. The two forms are functionally identical: two players do battle using constructed decks of their choosing. However, where Casual games are simple 'friendly' matches, Ranked games take place within a complex ranking system, and offer special rewards. 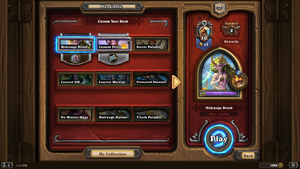 The play screen in Classic format

Players can also choose between Standard format,Wild format, Classic format and Casual through the icon just above Ranked information. The choice of game format determines which cards are eligible to feature in play, through players' decks and special effects. Standard format is the default option, featuring only cards released in the last 2 years, as well as a Core set . Wild format also allows the use of cards from older sets, and only becomes available to players once they possess a card from such a set. Classic format restricts players to the 240 cards from the original Basic and Classic sets as they appeared on the 1.0.0.5832 patch of June 2014. No card changes, removals, or additions to those sets are in effect. Whichever format is chosen, Play mode guarantees that only "regular" cards will appear in a match, as opposed to special cards and mechanics seen in more unpredictable game modes such as adventures and Tavern Brawls. 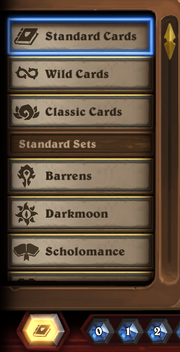 the dropdown menu for changing the play mode within the collection manager: only cards legal to play within the designated mode will display

To enter a match, the player must first select a deck with which to do battle. Once the player has unlocked more than 9 deck slots, a side button allows them to switch between two separate pages of decks. The "My Collection" button at the bottom of the screen gives a handy way to switch directly to the Collection Manager and back, without having to navigate the main menu. 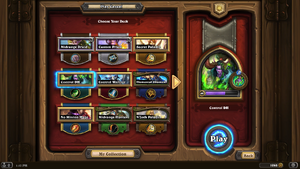 The play screen in Casual

Casual (also known as Unranked Play) matches allow you to experience all the challenges of Play mode, without worrying about losing your hard-won rank. Casual is the perfect place for testing a new deck, or levelling a new class, and is the ideal mode in which to start playing against human opponents, usually after learning the basics in Practice mode.

New players tend to do significantly better in Casual,[2] due to differences in the matchmaking technology (see below). As a result, new players are recommended to stick to Casual until they are confident in their abilities.

Casual lacks the goal-oriented motivation of Ranked mode, and cannot be used to earn rewards from the Highest Rank Bonus chest. However, players can still complete quests, earn experience, and earn gold from winning matches.

Matchmaking in Casual mode is determined by each player's Casual matchmaking rating (MMR), aiming to match the player against an opponent of comparable skill, with wins and losses affecting future opponent selection.[3] Casual MMRs are never reset, but are designed to change quickly in response to win and lose streaks.[4][5] Casual uses a single MMR, shared between Wild and Standard format.[1]

In Casual mode, new players are initially placed in a separate pool, allowing them to play exclusively against other new players. After a certain period, players are introduced into the main matchmaking pool.[6] According to Ben Brode, as of April 2016 players remain in the new player pool until they have played 10 games, or have obtained 2 legendary cards.[7] However, this is something that the developers tweak regularly.[8] The new player pool only exists for Casual Play.[7]

Even beyond the new player pool, Casual is the recommended mode for newer players.[2]

While the rules of Casual and Ranked play are identical, Casual matches generally feature a very different selection of decks, especially at higher levels. This is partly because players in Ranked mode tend to be pursuing success and higher ranks, while players in Casual mode are usually less focused on performance. Many players in Casual mode are experimenting with novel decks or decks with which they are unfamiliar, since they don't want to risk damaging their Ranked standing while doing so; while players in Ranked are more often using polished decks taken from decklists or well-established archetypes, and especially at higher levels are mostly using decks known to be successful in the current meta.

As a result, Casual generally features a larger variety of decks, and a larger range of cards overall. While this can allow players using polished and practised decks to find more success at a given level of play in Casual than in Ranked, for those accustomed to Ranked mode's current meta, Casual opponents can prove difficult to predict, with both deck construction and strategy not matching that predominantly seen in Ranked matches. Conversely, Casual players switching to Ranked may find their opponent's decks to be more polished, but far less diverse.

The new 5-tiered league system for Ranked mode in 2020.

Ranked (also known as Ranked Play) is the serious side of Play mode, with players able to earn special ranks to reflect their prowess in battle and also earn lucrative rewards.

Players gain rank by winning matches, with the player's Star Bonus or hidden MMR determining matchmaking. Each player's rank is reflected in a special medal, visible during Ranked play. There are 5 leagues, each containing 10 ranks, with each rank having their own special medal.

Ranked play occurs in seasons, each a month long. At the end of each season, rewards are handed out in the form of cards and card packs, as determined by the player's highest rank that season. Winning 5 ranked matches each season will also earn that season's unique card back, and reaching Legend during any season will award the Legend card back.