This article is using {{Card template}}.
See Help:Style guide/Card for how to edit this kind of article.
Edit this article
Plated Beetle
45930 • LOOT_413
Regular 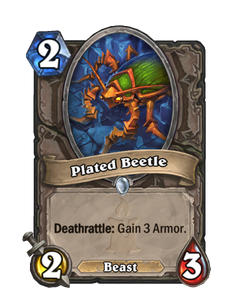 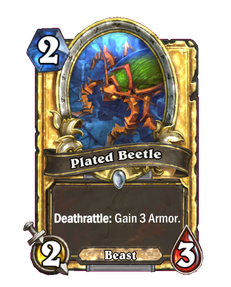 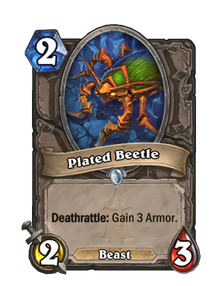 Plated Beetle is an common neutral minion card, from the Kobolds & Catacombs set.

Plated Beetle is a great defensive card. Compared to Earthen Ring Farseer, it's playable a turn earlier and has better stats for its mana cost. However, its effect is a Deathrattle; this can be useful for decks with synergies (such as N'Zoth, the Corruptor), but also means the Beetle doesn't offer immediate protection when played.

Beetles, also known as scarabs, are insects found in a few areas of Azeroth. A hardy insect that can dwell in just about any climate, the beetle is known to thrive on battlefields after the fighting has ended.