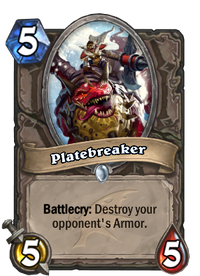 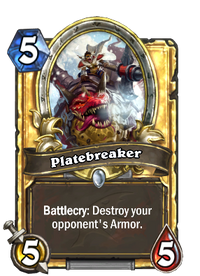 Platebreaker is a common neutral minion card, from the Descent of Dragons set.

Platebreaker can be obtained through Descent of Dragons card packs, or through crafting.

Platebreaker is a valuable minion in the Knights of the Frozen Throne mission, since some bosses (Lady Deathwhisper, Professor Putricide and The Lich King) start with lots of Armor, and Platebreaker can instantly remove all of their Armor, minimizing the amount of effort required to remove it. This is especially effective if you fight the Lich King as a warrior, since his cheat card The True King gives him 100 Armor and Platebreaker's Battlecry completely nullifies this advantage.