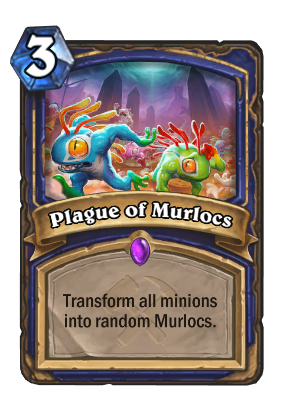 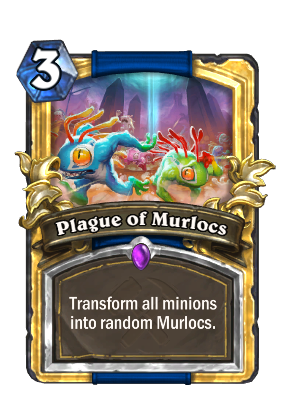 This is horrible! And adorable!

Plague of Murlocs is an epic shaman spell card, from the Saviors of Uldum set.

Plague of Murlocs can be obtained through Saviors of Uldum card packs, or through crafting.

A powerful source of soft removal. As a transform effect, Plague of Murlocs has most of the benefits of a Silence, including preventing Deathrattles, removing Enchantments, and otherwise clearing away abilities. It has the additional benefit of clearing away priority targets and replacing them with usually smaller minions, greatly reducing your opponent's board and bypassing Resurrection effects. Be prepared to deal with the results, since Murlocs have a lot of synergistic cards and may still be a threat.

This card can also be used offensively, turning your Totems into random Murlocs. It also works well with tokens created by Soul of the Murloc or Thunderhead. If you're playing a Murloc-synergy deck, you can follow up Plague of Murlocs with Murloc Warleader or Coldlight Seer.

Since most Murlocs have 3 or less health, Plague of Murlocs is great when followed up with Lightning Storm or Hagatha's Scheme. It can also be used with Earthquake in more desperate situations.