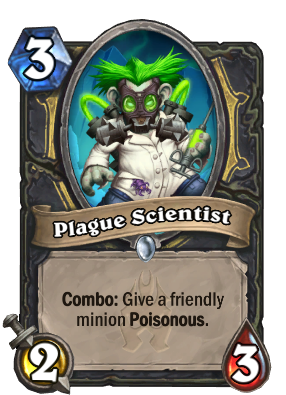 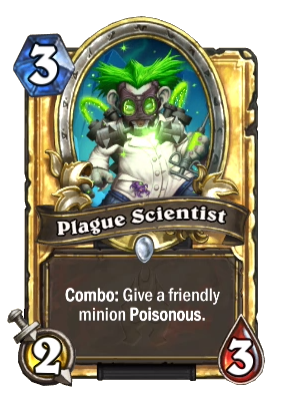 The excruciating pain means it's working!

Plague Scientist is a common rogue minion card, from the Knights of the Frozen Throne set. 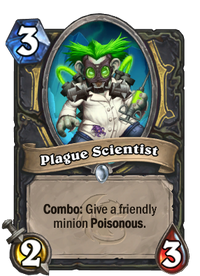 Plague Scientist can be obtained through Knights of the Frozen Throne card packs, or through crafting.

Plague Scientist (Core) is uncraftable and cannot be crafted or disenchanted.

Plague Scientist is a minion with a very strong effect, as it's essentially a poisonous minion with Charge. It can be used to allow any minion you have on the board to trade evenly. It has high potential in a Tempo Rogue deck, as the ability to trade in a cheap minion while developing another in the process can provide a massive tempo boost. However, the card is dependent on having minions on board, and not as flexible as other options like SI:7 Agent.

In Wild, it can be comboed with Unstable Ghoul as a delayed, but almost guaranteed board clear, filling the Rogue's need for a powerful board clear.

Plague Scientist is a strong Arena card, as any hard removal is usually desirable.