This article is using {{Card template}}.
See Help:Style guide/Card for how to edit this kind of article.
Edit this article
Plagiarize
59877 • SCH_706
Regular 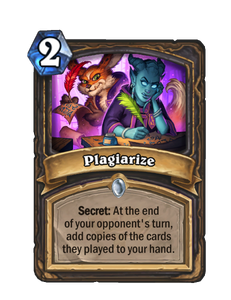 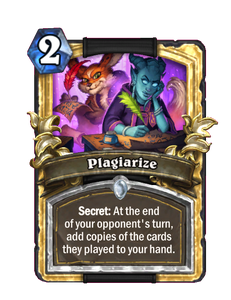 Dimensions: Full • 330 x 410px
Secret: At the end of your opponent's turn, add copies of the cards they played to your hand.
Flavor text 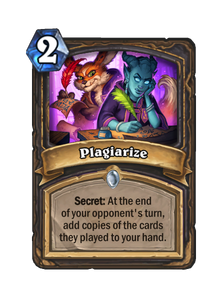 Plagiarize is a common rogue spell card, from the Scholomance Academy set.

The best use of Plagiarize is filling your hand with resources in the late game, especially if you don't have a lot of cards to use as an aggro or tempo Rogue. If you play this when both players are at 10 mana, chances are high that your opponent will either empty their hand to build a board or start playing draw cards themselves, such as Skull of Gul'dan or Arcane Intellect. Against other aggressive decks you can then build a board to match theirs, or use the combo pieces of slower decks for yourself. Conversely, playing this Secret on tempo is unlikely to net you anything stronger than a 2 or 3-drop, so it's best to avoid playing this card early.

Given the high odds of this Secret adding your opponent's class cards to your hand, Plagiarize can synergize with decks running Thief Rogue strategies such as Bazaar Burglary and Vendetta.

Combining this Secret with Sap can either deter them from playing the minion the next turn, or let you steal it and use its powers the next turn, like powerful cards like Kalecgos or Lorekeeper Polkelt.