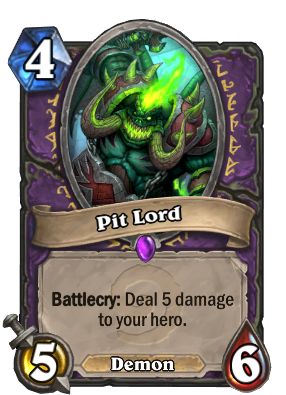 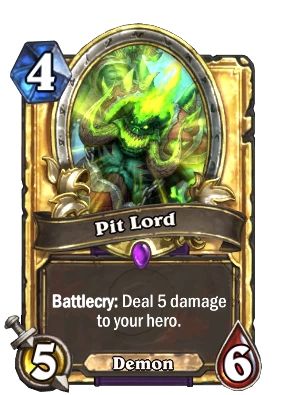 Mannoroth, Magtheridon, and Brutallus may be dead, but it turns out there are a LOT of pit lords.

Pit Lord is an epic warlock minion card, inducted into the Legacy set, formerly from the Classic set. 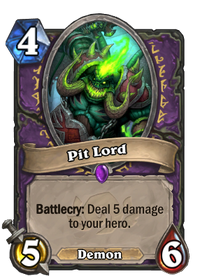 Pit Lord can be obtained through Classic card packs, or through crafting.

Like many warlock Demons, the Pit Lord comes with a heavy drawback to offset its low cost. Although you get a 5/6 for a mere 4 mana, the drawback is that the Pit Lord deals 5 damage to you. Care must be taken when summoning this Demon, as it can easily do more harm than good.

The Pit Lord is quite strong when played on curve, giving you a strong board advantage early game. He can output a lot of damage, and can take quite a few hits. However, its Battlecry deals a significant amount of damage to yourself. Due do how valuable health is to Warlocks, Pit Lord wastes more resources than it's worth if it's not used to its fullest. If it's removed effortlessly right after it's played, you've lost 5 health, to little benefit. This makes it difficult to play later in the game where opponents are more likely to answer the Pit Lord.

You can ignore its Battlecry if you summon it by other means, such as Possessed Lackey and Bloodreaver Gul'dan. However, there are generally much stronger demons to exploit these effects with.

Pit Lord has no drawback if you play it while you have Mal'Ganis in play.

Summon
To the slaughter.

The annihilan, commonly known as pit lords, are a powerful species of demon recruited by Kil'jaeden to serve the Burning Legion. Their leader, the most feared of them all, was Mannoroth the Destructor.

The pit lords who serve under Mannoroth the Destructor are some of the most cruel, barbarous butchers to ever roam the trackless wastes of the Twisting Nether. These hulking engines of hate and death love only to kill and bring sorrow to all living creatures. Fanatically loyal to Mannoroth, the pit lords will stop at nothing to see the will of the Legion upheld. These massive demons take sadistic pleasure from instilling crazed terror, and then slaughtering their enemies.

Magtheridon, the former Lord of Outland, is a pit lord who conquered the ruins of the orcish homeworld following its destruction. His reign was ended by the arrival of Illidan Stormrage, who took Magtheridon's throne at the Black Temple for himself. Deciding that Magtheridon would have a further part to play, Illidan had Magtheridon's body dragged to the Hellfire Citadel where he imprisoned the pit lord, leaving him at the mercy of the fel orcs. A group of adventurers entered the depths of Hellfire Citadel, released the former Lord of Outland from his bonds, and finally destroyed him, taking his head as proof of their prowess.