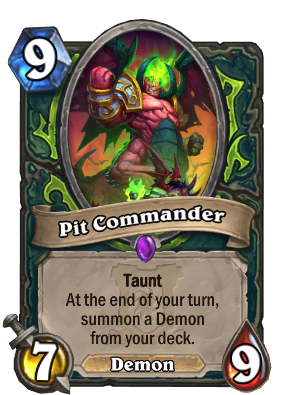 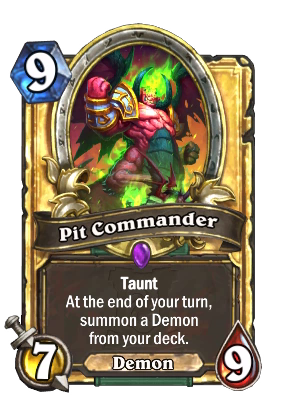 Taunt
At the end of your turn, summon a Demon from your deck.
Flavor text

Pit Commander is an epic demon hunter minion card, from the Ashes of Outland set.

Pit Commander typically puts a huge amount of stats into play. Its own respectable 7/9 Taunt body can be augmented with strong pulls like Priestess of Fury and Hulking Overfiend. Decks using Pit Commander should avoid less valuable demons, like Sightless Watcher, Satyr Overseer, and Spirit Jailer, since this diminishes Pit Commander's value and can even waste Battlecries.

Unfortunately, many large Demon Hunter demons have strong end of turn effects, which will be ignored. These include Priestess of Fury, Ancient Void Hound, and even the second copy of Pit Commander. Rush will also be lost. This makes Pit Commander most useful for putting large stats on the field, but does leave them susceptible to board clears from your opponent.

Since the card pulls minions directly from your deck, it can speed up fatigue and is useless once you run out of demons.

Pit Commander's own cost is fairly restrictive, but it can be cheated out of your hand faster using Raging Felscreamer or Fel Summoner.

Pit Commander is a colossal Pit Lord that stands outside the Stair of Destiny.

The Pit Commander is an annihilan. It can be seen commanding the Burning Legion force at the Outland side of the Dark Portal.