This article is using {{Card template}}.
See Help:Style guide/Card for how to edit this kind of article.
Edit this article
Piranha Launcher
40683 • CFM_337
Regular 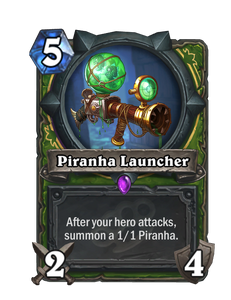 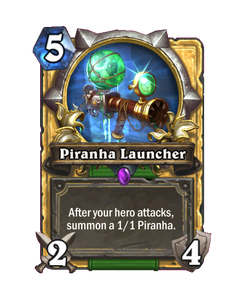 A great improvement over the guppy launcher. 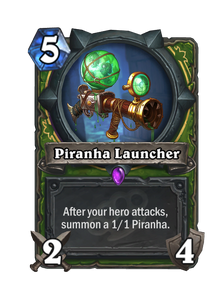 Piranha Launcher is an epic hunter weapon card, from the Mean Streets of Gadgetzan set. 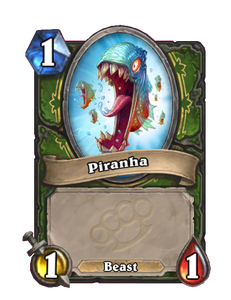 Piranha Launcher is a card that has seen practically no play due to its high cost, low-impact effect, and lack of synergy with other Hunter cards and themes. In comparison, Assassin's Blade and Charged Hammer are two cards which are objectively better either in stats or mana cost, neither of which are playable in most cases. Hunter is a class commonly associated with cards with strong board presence and/or immediate impact; Piranha Launcher achieves neither of these things, generally dealing a mere 3 damage per turn.

Piranha Launcher has some synergy with some Beast synergy cards like Tundra Rhino, Starving Buzzard, and Spirit of the Lynx, summoning a 1/1 Beast for what is effectively 0 mana on that turn. However, the fact that they all share the same Mana cost and have poor stat distribution leads to awkward mana curves and a series of low-impact turns.

Desert Spear is a similar card to Piranha Launcher, but with much better stat efficiency and the summoned beasts have Rush to give it a much higher impact.