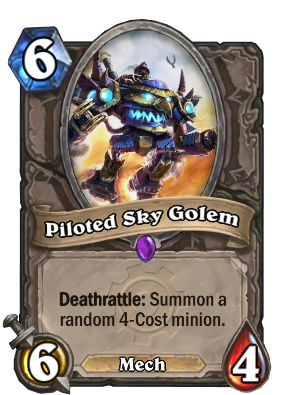 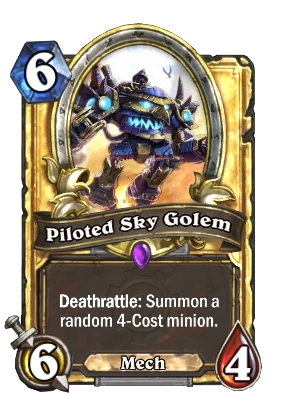 The pinnacle of goblin engineering. Includes an espresso machine and foot massager.

Piloted Sky Golem is an epic neutral minion card, from the Goblins vs Gnomes set.

Piloted Sky Golem can be obtained through Goblins vs Gnomes card packs, or through crafting.

A substantial minion in its own right, the Golem's value is often determined by which minion is summoned by its Deathrattle. This introduces a fairly large measure of RNG into the card's value, and rewards players and decks which are able to improvise around the introduction of unexpected minions.

Significant possible summons include Cult Master, Flamewreathed Faceless, Lotus Illusionist, Pit Lord, Hungry Dragon, Ancient Shade and Piloted Shredder. If the owner of the Golem is a Druid, Fandral Staghelm is a very good summon. For a full list, see below.

The below table lists all 4-cost collectible minions available in Wild format, representing the full range of possible summons from the Sky Golem.

The Sky Golem is an exclusive flying mount in World of Warcraft. Extremely expensive to obtain, the Sky Golem is a goblin shredder capable of travelling at high speed in air and on land.