This article is using {{Card template}}.
See Help:Style guide/Card for how to edit this kind of article.
Edit this article
Piloted Shredder
2064 • GVG_096
Regular 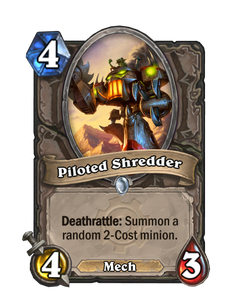 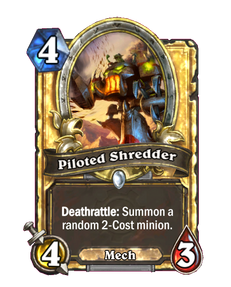 Once upon a time, only goblins piloted shredders. These days, everyone from Doomsayer to Lorewalker Cho seems to ride one. 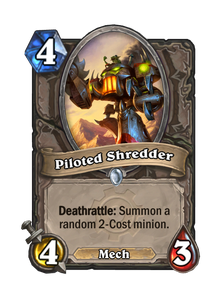 Piloted Shredder is a common neutral minion card, from the Goblins vs Gnomes set.

A substantial minion in its own right, the Shredder's value is often determined by which minion is summoned by its Deathrattle. This introduces a fairly large measure of RNG into the card's value, and rewards players and decks which are able to improvise around the introduction of unexpected minions.

Regardless of whether the Shredder belongs to you or your opponent, it is often wise to trigger the Deathrattle of the Shredder before making other plays, allowing you to take into account the presence of the new minion. It is particularly worthwhile when planning to summon other minions that turn, in case a Doomsayer is summoned; the player can then hold the minions until after the Doomsayer has cleared the board, avoiding immediately losing them to its effect. However, while generally useful for informing your decisions, at times this approach may backfire, such as by producing an enemy taunt minion, Armorsmith, or Scavenging Hyena, which can then feed off subsequent combat.

A list of collectible 2-Cost minions in Standard and Wild can be found here.

While the common advice is to pop Shredders as early as possible in case of Doomsayer making it a bad idea to play more minions, don't forget that Mana Wraith or Nerub'ar Weblord or Lorewalker Cho, with their abilities, can make it inconvenient to play minions or spells once on the field, and Dire Wolf Alpha and the 4 possible taunts including Annoy-o-Tron can change what trades are good. Other strategically interesting possibilities are Explosive Sheep, Scavenging Hyena, Knife Juggler, Wild Pyromancer, Patient Assassin and Faerie Dragon.