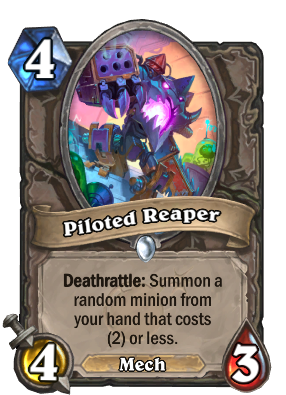 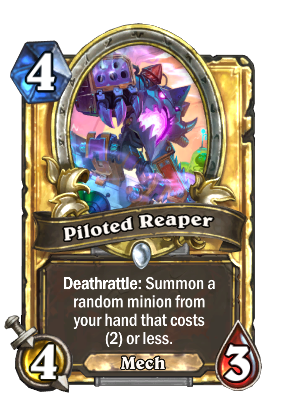 Deathrattle: Summon a random minion from your hand that costs (2) or less.
Flavor text

New facial recognition systems keep out the Lorewalkers and Doomsayers.

Piloted Reaper is a common neutral minion card, from The Boomsday Project set.

Piloted Reaper can be obtained through The Boomsday Project card packs, or through crafting.

Similar to Piloted Shredder, Piloted Reaper has substantial stats on its own and presents a strong Deathrattle. Unlike the random Shredder however, Reaper's effect allows you to choose a minion to be summoned, allowing you to cheat minions out of your hand. This can allow you to summon cards like Millhouse Manastorm or Cornered Sentry while dodging its harmful Battlecry, or replace itself with Taunt minions strategically. However, the loss of randomness removes the card's chance to suddenly change the game with unexpected Doomsayers, Lorewalker Chos, or other such cards.

This card has a few other downsides over Piloted Shredder. If you don't have a minion that costs 2 or less in your hand, this card is very inefficient. It also costs card advantage, pulling a card directly from your hand (unlike the Shredder, which generates it for free). As such, Piloted Reaper should only be used by decks specifically looking to abuse its effect.