Hearthstone Wiki
Register
Don't have an account?
Sign In
Advertisement
in: All cards, Wild format cards, Human art,
and 2 more

This article is using {{Card template}}.
See Help:Style guide/Card for how to edit this kind of article.
Edit this article
Pilfer
52264 • EX1_182
Regular 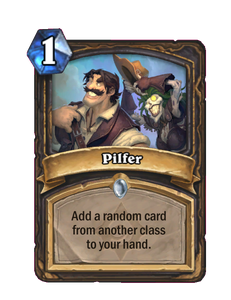 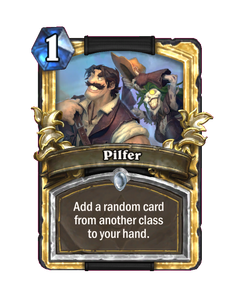 Dimensions: Full • 330 x 410px
Add a random card from another class to your hand.
Flavor text

The class is always greener on the other side of the board. 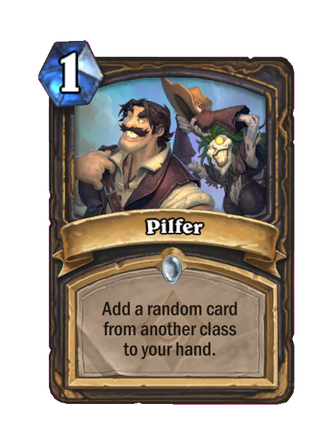 Pilfer is a common rogue spell card, inducted into the Legacy set, formerly from the Classic set.

A weaker version of

Hallucination that replaces itself with a random card. While undesirable for most decks, the effect can be strong included with other cards that synergize with non-Rogue cards like

Tess Greymane. In particular, this card works very well with Underbelly Fence to activate its effect on turn 2.

Eviscerate, and helpfully maintains card advantage while doing so.