Edit
watch 02:53
GTA: The Criminal Enterprises - The Loop
Do you like this video?
Play Sound
Peter Whalen
Regular 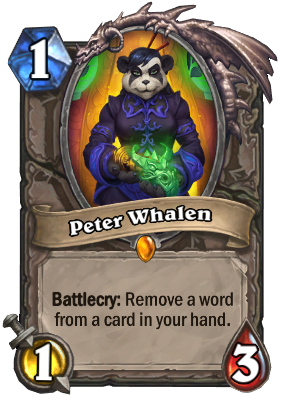 Elite
Battlecry: Remove a word from a card in your hand.
External links

Whalen joined the team in July 2015.[3][2] Prior to this, he is best known for creating the rogue-like deckbuilding RPG Dream Quest.

Whalen left the Hearthstone team in January 2020 and now works on an unannounced Blizzard project along with Mike Donais.[4]

As senior game designer for Blizzard Entertainment's Hearthstone: Heroes of Warcraft, Peter Whalen works on numerous aspects of the initial designs, building the foundation for the digital card game’s expansions and Adventures. He designs missions, mechanics, and applies liberal amounts of flavor. He also coordinates with the rest of the team to ensure a consistent vision for upcoming content.

Whalen joined the Hearthstone team in 2015. In his free time, he enjoys playing many different types of games. Blizzard’s games are among his favorites, but he also enjoys discovering other card games, board games, RPGs, and strategy games.[5]