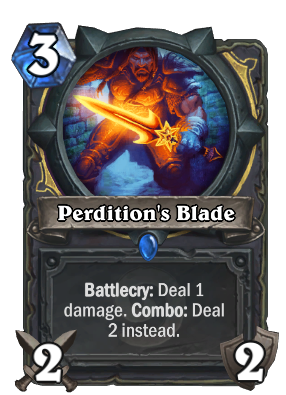 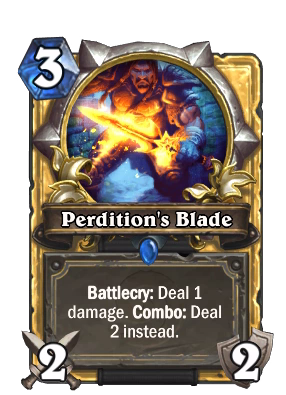 Perdition's Blade is Ragnaros's back-up weapon while Sulfuras is in the shop.

Perdition's Blade is a rare rogue weapon card, inducted into the Legacy set, formerly from the Classic set. 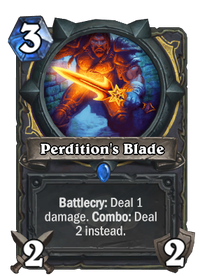 Perdition's Blade can be obtained through Classic card packs, or through crafting.

Perdition's Blade's Battlecry is well suited for destroying small opponents. Using the card's Combo Battlecry on an opponent then attacking it will give you the ability to deal 4 damage that turn. Alternatively, this weapon's Battlecry can be used to take out enemies with high Attack and low Health, such as Magma Rager. It is recommended that you use this weapon's Combo if possible, as the base damage for the Battlecry is not very powerful. Like many other rogue Combo cards, this weapon is very useful when used in combination with the The Coin.

Perdition's Blade is a weapon in World of Warcraft. It is a rare drop from Ragnaros the Firelord in Molten Core.