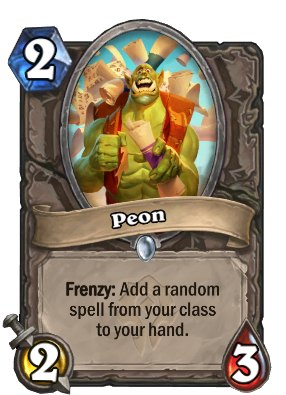 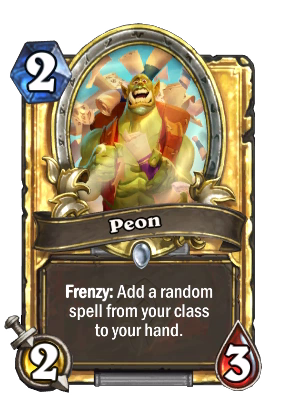 Frenzy: Add a random spell from your class to your hand.
Flavor text

Joke's on the peon: the job's never done.

Peon is a common neutral minion card, from the Forged in the Barrens set.

Regular Peon can be obtained through Forged in the Barrens card packs, through crafting, or as an Arena reward.

Two copies of golden Peon are obtained by reaching level 6 in the Forged in the Barrens' Rewards Track. Golden Peon is uncraftable and cannot be crafted or disenchanted.

This minion has vanilla River Crocolisk stats without the beast tag, with the possibility of gaining a single spell if damaged without being killed. Typically, 1 random spell is not worth a slot in a constructed deck. Peon is an unfortunately subpar choice, even in Arena.

Peons are the laborers, workers and lumberjacks of Horde and the orcish clans. They are typically unfit for battle, cowardly and lazy but their work is simply indispensable for the other orcs to focus on battle. This is why the importance of the peon is recognized in the holiday Peon Day. Physically most peons are permanently bent from years of labor and trudge expressionlessly in their duty, a large sack slouched over malformed shoulders that are broader than any soldier's.