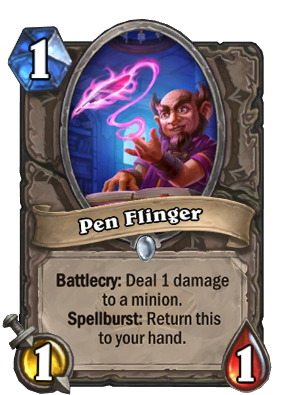 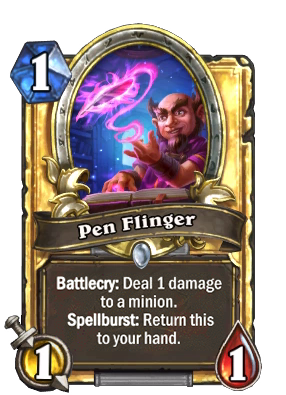 Battlecry: Deal 1 damage to a minion. Spellburst: Return this to your hand.
Flavor text

The pen is also a more aerodynamic short-range projectile than the sword.

Pen Flinger is a common neutral minion card, from the Scholomance Academy set.

Pen Flinger can be obtained through Scholomance Academy card packs, through crafting, or as an Arena reward.

Pen Flinger is a repeatable ping, so long as you can continue to fuel it with with spells. You can see it as adding 1 damage to every spell you cast, for 1 extra mana each time. This can allow you to whittle down minions on turns where you wouldn't have much else to do.

You should try to end each Pen Flinger turn by casting a spell, hiding the minion in your hand. This will protect it from your opponent, ensuring you can reuse the effect on a later turn. Just be careful not to cast buffs on your Pen Flinger, since the bounce will remove the buff immediately. Also be careful using area of effect spells that can destroy the Pen Flinger, as the minion needs to be in play after the spell has resolved for the Spellburst to trigger.

You don't always need to worry about using the Spellburst. Against aggressive decks, simply playing it for the ping in the early game can be very advantageous for board control.

Pen Flinger does well in Midrange Paladin decks using the Libram package, particularly Libram of Wisdom. With discounts and minions to trade in, Libram of Wisdom can be recast for 0 mana multiple times in one turn. Control Warrior and other spell-heavy control decks can use Pen Flinger to give slower turns something to do.