This article is using {{Card template}}.
See Help:Style guide/Card for how to edit this kind of article.
Edit this article
Patient Assassin
1133 • EX1_522
Regular 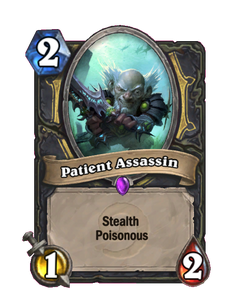 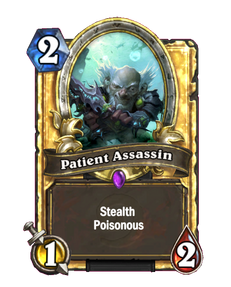 He’s not really that patient. It just takes a while for someone to walk by that he can actually reach. 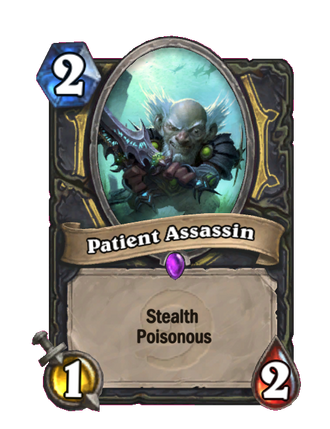 Patient Assassin is an epic rogue minion card, inducted into the Legacy set, formerly from the Classic set. 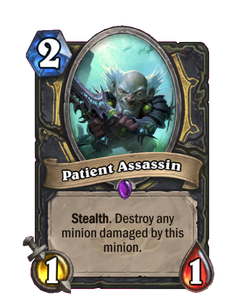 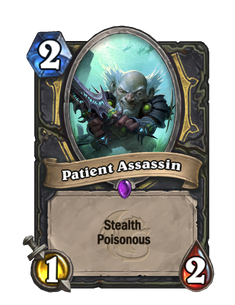 Two copies of regular Patient Assassin are obtained for raising rogue to level 9.

Patient Assassin (Core) is uncraftable and cannot be crafted or disenchanted. 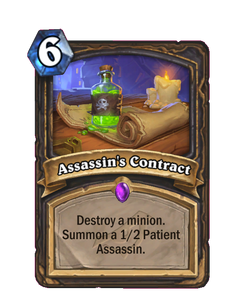 While nonthreatening at first glance, Patient Assassin possesses the Poisonous ability, allowing him to instantly kill any card he can damage. He also comes onto the field with Stealth which makes him unable to be targeted by attacks or spells. Patient Assassin can be left on the field to dissuade your opponent from playing powerful cards until he is disposed of. Although, it should be noted that he can be killed by an enemy spell that targets all minions, such as

Arcane Explosion, or randomly-assigned damage such as

Patient Assassin can be combined with

Kel'Thuzad for devastating results since you can kill a minion every turn until Kel'Thuzad is removed.