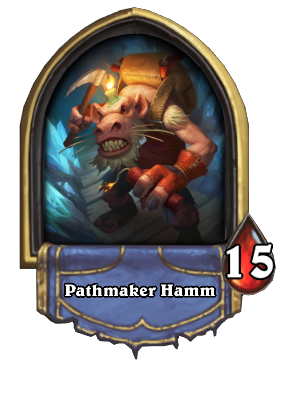 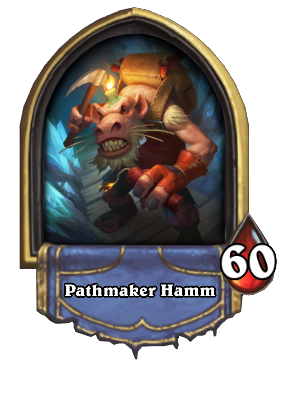 Pathmaker Hamm is a boss that can be encountered during the Dungeon Run.

Rank 1
At Rank 1, Pathmaker Hamm's hero power is a repeatable but weaker Arcane Missiles. On its first form, you will sustain the damage. So play all the minions you like. Pathmaker Hamm's deck's main objective is to gain control of the board with rng. (It is filled with Bomb Lobbers, Bomb Squads, Mad Bombers and Madder Bombers )

The best play for you is to flood the board as much as possible. Giving him more targets to hit to try and avoid the weaker ones being chosen, try throwing a minion every turn, kill his minions as they come, control the board and you win.

Rank 2
At Rank 2, Pathmaker Hamm's hero power is a cheaper and arguably better Consecration, at least early on. Most early game minion are now free targets as Pathmaker Hamm's hero power will now hit 3 targets and deal 2 damage. However, he will only strike every target only once. The first few turns, you are allowed to skip or play minions that are above 2 health. Use the Rank 1 strategy of giving him more targets to hit and gain control of the board. Try not to waste any minion. Minions that can gain access to Divine Shield can be helpful for atleast one turn.

Both
Pathmaker Hamm's hero power can only hit the same target once every turn.

Pathmaker Hamm is unique to hearthstone. In World of Warcraft, some kobolds do use dynamite in their arsenal of abilities.