This article is using {{Card template}}.
See Help:Style guide/Card for how to edit this kind of article.
Edit this article
Patches the Pirate
40465 • CFM_637
Regular 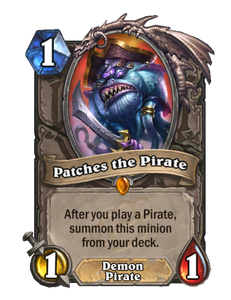 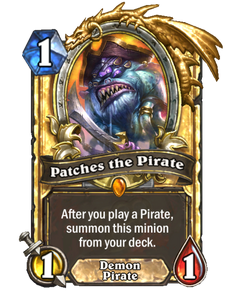 Dimensions: Full • 330 x 410px
Elite
After you play a Pirate, summon this minion from your deck.
Flavor text

What do sailors yell when Patches steals their treasure chest full of laws and other things being transported to parliament for a vote? "The Eyes have it!" 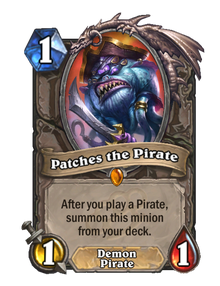 For the updates to Hearthstone, see Patches.

Patches the Pirate is a legendary neutral minion card, from the Mean Streets of Gadgetzan set.

Beneath Patches' paltry statline lies a high amount of utility. The most powerful aspect of Patches is the tempo he generates on the first few turns. When he is brought from the deck to the battlefield, he does two things: Add 1/1 worth of stats to your board and making your deck one card smaller. He can be brought out as early as the first turn with a 1-cost Pirate like Southsea Deckhand, Small-Time Buccaneer, Bloodsail Corsair, and Swashburglar, which means you start the turn with 2 mana's worth of minions. This is especially effective on the player going first. Because he's summoned from your deck directly, this makes him a free minion with little investment required on the player and does not negatively impact resources at hand, compared to other 0-cost 1/1s like Wisp. He also "shrinks" your deck when this happens, making your draws ever so slightly more predictable.

On the other hand, Patches is a very weak card when he actually is drawn, making him a worse Wisp with Pirate synergy.

Patches is most easily activated in a Pirate deck, such as Pirate Warrior, that contains many Pirates. However, many other deck types can be modified to include a few Pirates, or may already include some, without truly being a Pirate deck, namely any aggro or tempo deck, especially ones that use Prince Keleseth. Even a couple of Pirates is enough to benefit from including Patches, serving to effectively buff the value of those cards. Any 1-cost Pirate or Southsea Captain are good cards to pull Patches with.

As with other similar effects, Patches will always be summoned on the right side of the board, which is relevant for positional buffs like the one granted by Flametongue Totem.

In Wild, this card forms a combo with Gang Up: by casting it on Patches, the next time the player plays a Pirate they will summon three more Patches.

Patches is unique to Hearthstone. Similar to the Floating Watcher, Patches is an observer, but he is also the first known example of an observer pirate. He is the envy of pirates everywhere due to having more eyepatches than most pirates have eyes.[2][3]

Following his introduction in Hearthstone, Patches would go on to appear in World of Warcraft with the Battle for Azeroth expansion. More specifically, he can be summoned in the Freehold dungeon by placing a Hearthstone Board on the ground prior to the boss fight with Skycap'n Kragg (another original Hearthstone pirate who made the transition into WoW). Defeating Patches is the subject of the achievement I'm in Charge Now!.

Patches saw its first iteration in early 2014 as "Dragon Whelp", a non-legendary 1/1 Dragon to be included in the Blackrock Mountain set. Its effect was similar to the final card, but was triggered by the playing of a Dragon rather than a Pirate, and it did not have Charge. The non-legendary status also allowed the player to include 2 copies in their deck. However, a preference for Dragons to mostly remain high-cost, and "odd" synergy with Faerie Dragon resulted in the developers dropping card from the set, and trying it as a legendary minion in the next set.[3]

The developers "briefly considered" making the card a Murloc, but despite its design fitting with the type's swarming gameplay, it was found to be the most fun as a Pirate. Once it was changed to a legendary, the developers tried making the card a 2/1, before settling on a 1/1 Charge design. While it worked well in the Grand Tournament set, the card was removed "last second" due to synergy with One-Eyed Cheat and Ship's Cannon.[4] It was only the introduction of game formats and the relegation of One-Eyed Cheat to Wild format that would later make the card's design viable; this would prevent it from achieving problematic power levels in Standard format, while its higher power level would not be considered problematic in Wild format, which has a higher power level overall as well as a higher tolerance for unusual combos in general.[5][3][6]

Prior to the card's removal, The Grand Tournament featured two legendary Pirate minions: Skycap'n Kragg and Captain Scaleblade.[7] The card discussed on this page was the original Skycap'n Kragg.[8] Because the art for that card was somewhat iconically seen in the expansion's trailer, when the effect of the card was deemed too powerful, the art and titles of the two Pirates were swapped, with Skycap'n Kragg becoming a 4/6 Charge, and the other design (and character) being left out of the set.[9][3]

However, while it was removed from the set, the original stats and art for the removed Pirate card were still shown in the expansion's trailer. As a result, players became curious about the unnamed legendary. Brode revealed some background about the card, including that it had been removed due to synergy with an unnamed card from the Goblins vs Gnomes set,[10][5] but stated that he was "going to try and sneak it in again someday, so no spoilers".[11] Balance Designer Dean Ayala described it as his favourite card,[12] stating "it was a card so awesome that it would have overshadowed everything else, thus must have been cut."[13]

With Brode continuing to champion its inclusion in each new set,[9] the developers tried again to add the card in Whispers of the Old Gods, as the original design for N'Zoth's First Mate (initially jokingly titled "Dean’s First Mate", in reference to Dean Ayala's love of the card).[4] However, despite being a Warrior-only card, the design was again cut. In July 2016 Brode admitted that he regretted not having made the card.[14][3]

It was not until 16 months after its first public appearance in the The Grand Tournament trailer that the card would see an official debut as Patches the Pirate, featured as part of the initial reveal for Mean Streets of Gadgetzan. The set was the right fit for Patches due to several factors, most importantly the removal of One-Eyed Cheat and Ship's Cannon from Standard format, as well as the position of Mean Streets as the final set of the year, resulting in a bigger card pool and thus a reduced likelihood of Patches having a 'disproportionate' impact.[4]

Patches is therefore the third name and art for the same underlying card design, with all three depicting flying pirates of one kind or another. According to senior game designer Matt Place, the card's roughly 2 year history "might be the record. It's certainly one of the longest running development cycles of any card."[4]

"It was my favorite card and a lot of the design group still makes fun of me. Because it was the last week [before] BRM and he was in the set and I was like, 'Oh, this is awesome, I want to play him in my deck.' And then I got sick and I came back and they were like, 'Oh, we cut your favorite card.' Now every time anyone gets sick we're like, 'What's your favorite card?' 'No! I'm not telling you!'"[17]