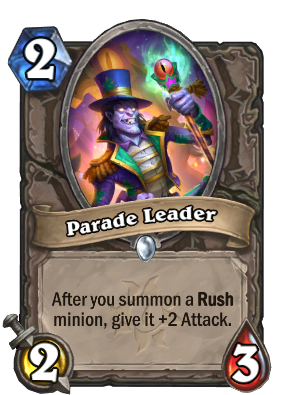 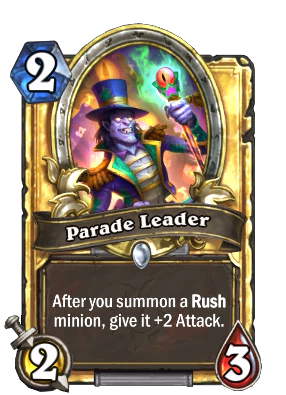 After you summon a Rush minion, give it +2 Attack.
Flavor text

He's always going to reign on his parade.

Parade Leader is a common neutral minion card, from the Madness at the Darkmoon Faire set.

Parade Leader can be obtained through Madness at the Darkmoon Faire card packs, through crafting, or as an Arena reward.

Parade Leader is best in decks that run enough Rush minions (or cards that summon them) to consistently make use of its effect. Though every class has access to some Rush cards, Warrior, Hunter, and Demon Hunter are the classes most affiliated with the ability and thus are best suited for utilizing this card. Shaman also has some options in its Galakrond package.

Cards that generate multiple small Rush minions (like Coordinated Strike, Springpaw, Voltaic Burst, and Bumper Car) can get the best use out of Parade Leader's effect by more efficiently clearing out enemy minions, though this is a poor replacement for more conventional removal options. Consider using additional Rush and/or token synergizers (like Feast of Souls, Scavenging Hyena, and/or Knife Juggler) to squeeze as much value from this setup as possible. Alternatively, you can try to use high-health minions (such as Crabrider) that have a better chance of getting more usage out of the attack buff.