This article is using {{Card template}}.
See Help:Style guide/Card for how to edit this kind of article.
Edit this article
Pantry Spider
39207 • KAR_030a
Regular 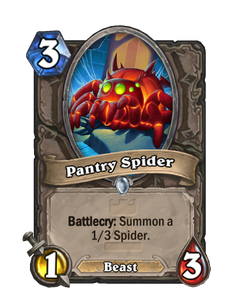 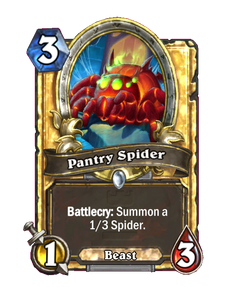 You have to admit, they make a cute couple. 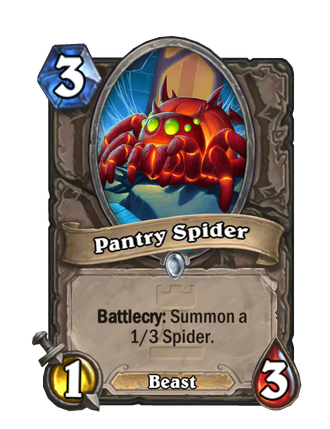 Pantry Spider is a common neutral minion card, from the One Night in Karazhan set. 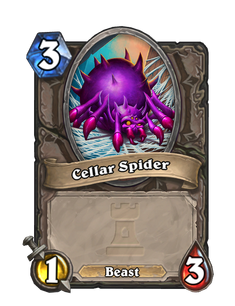 This card may appear to have decent stat value, being 2/6 in total for only 3 mana. However, as both are 1/3 minions they trade poorly. This weak stat distribution has little impact on the battlefield as it can't trade well. In a matchup against regular 3-drops with at least three Attack, such as such as

However the two minions are sticky, plus work very well with efficient Attack buffs, such as

Evolve decks this card is notable as the Spiders are counted as 3 mana. For instance, playing Pantry Spider and Evolve costs 4 mana, but summons two 4-mana minions. Both are randomly selected, but in most cases the result will be better than you normally expect for 4 mana.

A slightly weaker but still strong combo is with

Master of Evolution, evolving one of the two spiders to a random 4-mana minion.