This article is using {{Card template}}.
See Help:Style guide/Card for how to edit this kind of article.
Edit this article
Pandaren Importer
64713 • SW_065
Regular 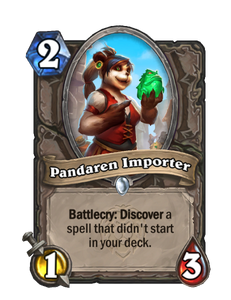 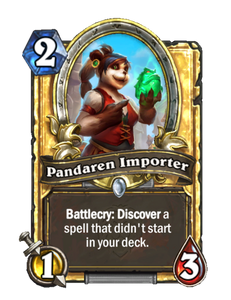 She carries everything you didn't want and more! 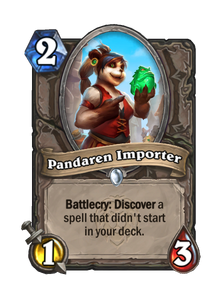 Pandaren Importer is a common neutral minion card, from the United in Stormwind set.

Golden Pandaren Importer is uncraftable and cannot be crafted or disenchanted.

Pandaren Importer allows you to discover a spell for a low cost of 2 mana. However the player can only discover spells that didn't exist in the deck to begin with. This can be very flexible as the player does not necessary to have certain spells in their deck that are suitable against certain decks and instead can allow the player to choose an appropriate spell against that particular deck.

However in Wild, there are many more spells to choose from but its tradeoff is that there are much more bad spells.

In Arena, Pandaren Importer is extremely powerful as players do not get to draft many spells in the deck which allows it to discover powerful spells directly from its Battlecry.