This article is using {{Card template}}.
See Help:Style guide/Card for how to edit this kind of article.
Edit this article
Ozruk
41294 • UNG_907
Regular 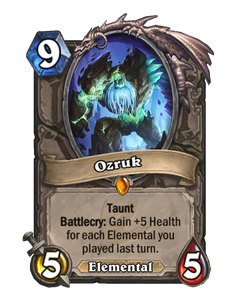 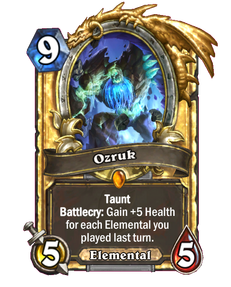 Between you and me, Ozruk is a bit obsessed with his body. 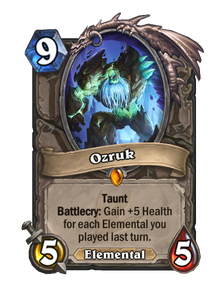 Ozruk is a legendary neutral minion card, from the Journey to Un'Goro set.

Ozruk is a mighty Taunt as long as you've fueled it with a few Elementals on your previous turn. With only two Elementals, he becomes a 5/15, capable of blocking multiple attacks while putting out decent damage of his own. Ozruk's main ability is gaining stats, and because of that, he's extremely vulnerable to Silences and Transform effects. Try and bait out these abilities from your opponent before playing Ozruk.

Keep in mind that Ozruk counts Elementals played, not summoned. He has no synergy with Stone Sentinel or Kalimos' Invocation of Earth. However, he does have synergy with cards that add Elementals to your hand, like Fire Fly, provided you played both the Fire Fly and the generated Flame Elemental on the previous turn.

From the World of Warcraft adventure guide
Ozruk has served as Stonecore's guardian since Deepholm's creation. It is unknown why Ozruk has remained in the Stonecore, but it has become apparent that the guardian now believes that anyone opposed to Deathwing is a threat to Deepholm, and should therefore be destroyed.