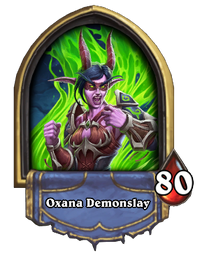 Slaying demons is her profession, but beating you is her passion.

Oxana Demonslay is a boss that can be encountered in The Dalaran Heist adventure.

These decks correspond only to levels 6-8. If this boss is encountered on level 5, her deck will be missing 5 random cards.

Because of her hero power, your best option is to take Oxana down slowly.

Oxana Demonslay
Demons are my quarry, but you'll do.
With a face like that, you might as well be a demon. (vs. Tekahn)
I hunt demons. Looks like you've got a few of your own. (vs. George the Fallen)

Rakanishu
You've got quite the aura to you.

Oxana Demonslay
Your foul tongue is more twisted than your soul.

Oxana Demonslay
Burn!
Burn away the corrupt.
Fall before me!
I will pay any price.
Sear and smolder.
Suffer, weaklings!

Oxana Demonslay
Afraid? Your invasion will fail.
Do you always hesitate? Or do I scare you?
I've stopped worse than you.

Burn until only a soul remains.

Aha! I knew you were in league with them!
Demons! I will destroy you!

Stormrage! You'd dare ally with THEM?!

Oxana Demonslay
Another falls before my blade.

Oxana Demonslay is a night elf demon hunter and vendor found at the Black Market in Dalaran's Underbelly.