Edit
watch 02:52
Roblox: DeepWoken - The Loop
Do you like this video?
Play Sound
Overseer Mogark
Regular 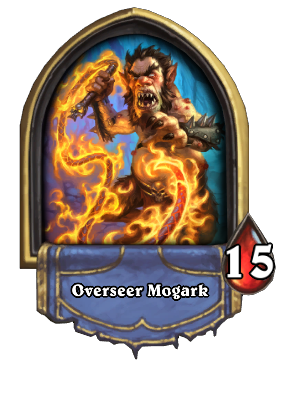 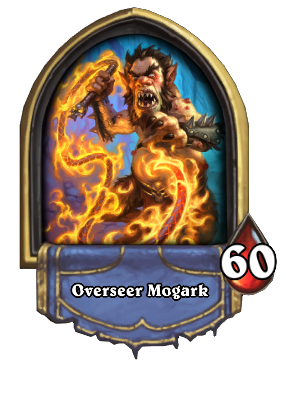 This trogg commander is extra "motivational" to underlings.
External links

Overseer Mogark is a boss that can be encountered during the Dungeon Run.

Rank 1
At Rank 1, Overseer Mogark runs a deathrattle deck similar to the old egg and warlock combo. In Rank 1, Mogark's hero power is an infinite Cruel Taskmaster (gives 2 damage for 1 health). He will buff his minions with the ability to do more damage, and combo it to great effect with cards like Nerubian Egg. His first form is not too hard, since he will need to damage his minions significantly for a large attack bonus. To win, take control of the board and deal with his minions as they come, or reduce the 0 attack minions to 1HP with careful trades so he cannot buff them. Be cautious when killing the eggs, as the minions generated are not only harder to deal with, but are better buff targets for him. Try not to give him a chance to buff, and immediately kill enraging minions.

Rank 2
Rank 2 becomes a desperate climb as he will buff his minions by 5 attack. The best way to stay ahead is to deal with his minions as they come, but this time trading is much more difficult. Reducing eggs to 1HP to buy time and make them non-viable buff targets rather than outright killing them and giving him a potent swing makes early-game success much easier to obtain. Low-cost token minions or charge minions are good candidates for trading into his potent minions if they happen to get quite buffed, while higher-attack minions are better saved for dealing with threats that absolutely cannot be left on the board, such as Frothing Berserker. Leaving his minions uncontrolled on the board for too long can be fatal.

Both
Trade wisely by leaving him no minions to buff, or reduce minions 0 attack minions to 1HP so that buffs are not viable.

Overseer Mogark
Get Moving!
GO NOW!
Faster!
Step it up!
Whip it good.

Overseer Mogark
A good leader know the way, go the way, and show the whip.

Overseer Mogark is unique to hearthstone. Mogark appears to be a slave driver.

The troggs are a race of brutish, cave-dwelling humanoids, originally descendants of the first type of titan-forged manufactured by the Forge of Wills. Known for their low intelligence, they often come into conflict with their distant dwarven relatives.