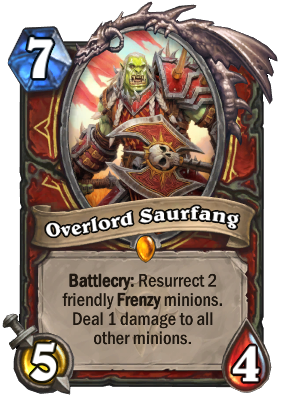 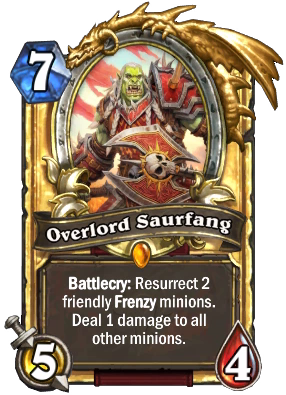 Eats more than his fair share of sour candy.

Overlord Saurfang is a legendary warrior minion card, from the Forged in the Barrens set.

Overlord Saurfang can be obtained through Forged in the Barrens card packs, through crafting, or as an Arena reward.

"Honor, young heroes... no matter how dire the battle... never forsake it."

— Varok to Horde adventurers after the death of his son

High Overlord Varok Saurfang was a renowned orc warrior of the Blackrock clan, and the younger brother of Broxigar. A famed veteran of the First, Second, and Third Wars, he served as Warchief Orgrim Doomhammer's second-in-command during the Second War, and as Supreme Commander of the Might of Kalimdor during the second War of the Shifting Sands against the qiraji of Ahn'Qiraj.

He later led the Kor'kron against the Scourge in Northrend, and assisted Thrall during the Siege of Orgrimmar. Following the tragic battle on the Broken Shore and Sylvanas Windrunner's promotion to Warchief, Saurfang took up the position of leader of Orgrimmar and resided in Grommash Hold. Disgusted with Sylvanas' increasingly cruel and brutal reign, Saurfang turned against the Warchief and asked King Anduin Wrynn for assistance in removing her from power. Both the armies of the Alliance and the Horde-loyalists gathered by Saurfang and Zekhan's campaign gathered at the gates of Orgrimmar, where Saurfang challenged Sylvanas to mak'gora, which culminated in his death and in Sylvanas's departure, preventing massive bloodshed between the two factions.