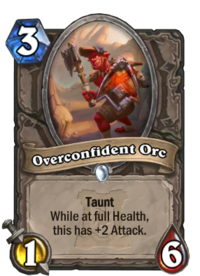 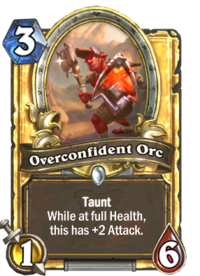 Taunt
While at full Health, this has +2 Attack.

Overconfident Orc is a common neutral minion card, from the Ashes of Outland set.

Overconfident Orc can be obtained through Ashes of Outland card packs, through crafting, or as an Arena reward.

Overconfident Orc is a overstatted taunt when summoned being 3 mana 3/6. However it loses its attack boost after taking damage therefore it is very good on its first minion attack and after that it's value is from its decently high health and a taunt.

Hero Power and cheap spells that are able to damage it can negate its +2 attack boost.

Healing it after taking damage can restore its attack boost.